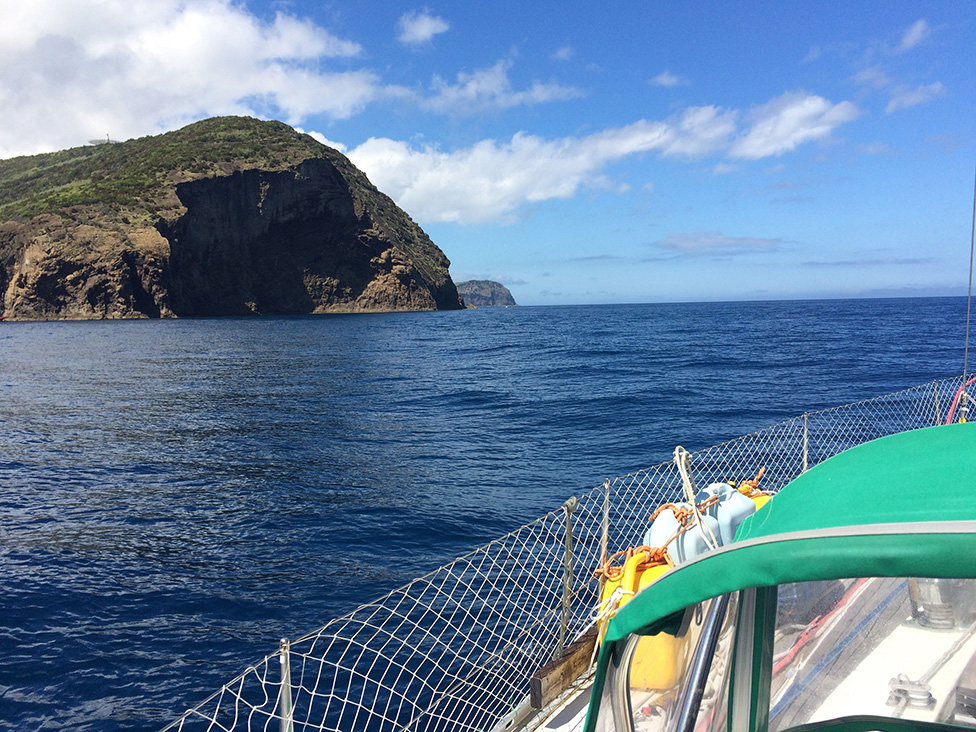 From the Arm to the Azores in 18 Days

Sailing from Halifax’s North West Arm across the Atlantic to the Azores and beyond has been on Judy Robertson’s bucket list for a long time.

“Anybody that knows me knows its been on my list of things I have to do,” said Robertson in a recent interview.

“I wanted to do it before I turned 50 but that didn’t happen and I’m going to turn 60 in December, so I decided nope I’ve got to do it now.”

Robertson, her boyfriend David Sawatzky, 19-year-old daughter Marine Robertson Kempton and fellow seasoned sailor Denis Linton, who celebrated his 77th birthday the day after arriving in the Azores, would be the crew for the trans-Atlantic journey aboard the 40-foot Avance style sloop, Semper Vivens.

“We headed off the end of May and spent 18 days getting to the Azores,” said Robertson.

It didn’t take long for the adventures to start.

It was the second night out and Sawatzky was on watch. “He woke me up for my turn and as I was getting ready, he kept saying get up here, just get up here, and then he said we’re only in two and half feet of water and my first thought was we’re going to hit Sable Island. I really blew it and then I thought no way, we steered 100 miles away from Sable Island.”

As Robertson was looking at the plotter a whale surfaced.

“He couldn’t have been more than three or four meters from the boat,” she said. “He was right beside us. He had been right beneath us and we picked it up on the depth sounder. It went from 200 feet deep to two and a half, so it was right there. That was pretty impressive.” Three days out and the weather turned really bad.

“There was a storm and we came up on the back side of it. We were getting the north wind and the clear air. It stalled, and another system came in from Ontario and slammed into it and just stopped and we were sailing into it. I thought we could get away from it, but we couldn’t so we hove-to. We had a triple reef in the main, a storm jib up and the main on one side and the jib on the other and you lash the wheel to windward, wrap the line through the wheel and also secure it to leeward. Then we went down below for two and half days and drank tea, read books and kept a good eye on the plotter to see if anything was on the IAS.” Marine Robertson Kempton and her boyfriend Nick Heath paint the Semper Vivens name and “BATTLE FLAG” on the pier in Horta, Azores. It is a huge tradition, says Judy Robertson, with hundreds painted there.

Before making the decision to heave-to, Robertson said the Semper Vivens was clipping along at 14.8 knots. “My boat should sail along at seven knots, seven and half on a nice day. I looked over my shoulder and there was a massive wall of water coming towards us and I said we’ve got to slow the boat down. I had a sea anchor and a drag onboard but heaving-to was the perfect option for my boat. It’s not the right thing for every boat to do, but for mine it is. Learning how to heave-to, you’re not pounding into it. Basically, you become a bottle bobbing on the water. I said to Denis, I’m just trying to find the sweet spot.”

While the vessel was hove-to, Robertson kept an eye on the IAS and ended up calling two ships. “One was about five miles away from us and I wanted to know if he was picking us up on the IAS and if he could hear me on the radio. He confirmed and said he would keep an eye out. There was another ship that was going to come within 200 meters of us, so I called them on channel 16 and there was no answer and I thought oh my God its so wild out here he’s not going to see us. Maybe he’s seeing us on IAS or radar maybe not.”

So, Robertson used the VFC channel 70 function on her radio to make contact with the ship, which allowed her to send a digital message to the bridge. The captain responded and had time to alter his course. Knowing how to operate the VFC part of a radio is really, really important, said Robertson, who teaches sailing, VHF courses and navigation.

“Most people never take the manual out. They never figure out how to use it.  It’s a great feature and a safety thing. So, go out learn about your boat, find your sweet spot, learn how to heave to and learn how to use your radio properly and how to make a call on channel 70. Practice with your friends because it could change your life because if I hadn’t had that…”

Robertson said when the weather calmed, it calmed quite quickly, and they started sailing. “We actually went 125 miles the right way because we were in the Gulf Stream.”

It was smooth sailing from there on with the wonders of the ocean wowing the crew along the way.  “One night we were about half way and there was a lot of Portuguese man o’ war in the water. Hundreds and hundreds of them. It was very beautiful,” said Robertson.

Another night, there was a lot of phosphorus on the water that “left a gorgeous trail of water behind us. Then a pod of dolphins came up and played with the boat.” The whole crew was on deck for the show. “It was just stunning. It was like some animated Walt Disney show. It was unbelievable. Phosphorus is so beautiful anyway, but it was so intense and with the dolphins playing in the wake it was so beautiful. They played with us for about 20 minutes to a half hour.”

Except for motoring past the Royal Nova Scotia Yacht Squadron when they sailed out of Halifax harbour, “we only used the engine for eight hours during the trip and that was the last eight hours for a bunch of reasons,” said Robertson. “There was no wind, my daughter’s boyfriend (Nick Heath) was waiting on the wharf and we wanted to get in before customs closed.”

Robertson said the feeling she got arriving in the Azores after travelling 1,700 miles across the open ocean is almost indescribable.

“To arrive in your own boat, it’s like you’ve sailed to another world. To me that was an amazing feeling. Even though I’ve been to Portugal and Europe many times it was a really cool feeling. It was like wow, I’ve finally gotten there.” Traveling around the Azores, Robertson was joined by her other daughter Steph, who was studying in Germany and her boyfriend. “They flew from Germany to the Azores, so it was great to have them aboard when we sailed around the Azores. It was absolutely fantastic. It was well worth going to. The flowers are spectacular. Its just an amazing bunch of islands.”

Initially, the plan has been to sail from the Azores to the Portugal mainland, another 800 to 900 miles before flying home to Halifax, but Robertson was sensing there was something wrong with the engine, so left the vessel there for repair, returning in early September to finish the journey. As it turned out the oil pump was clogged, “so it’s a good thing we did what we did. It would have seized if we had kept going.”

From the Azores to mainland Europe, Heath replaced Linton on the crew on a journey that took eight days and whose course had to be altered due to hurricane season.

“We sailed to Vigo, Spain on the northern Atlantic side. Hurricanes 800 miles across were following us. There was no way to avoid them and no wind, so we went south and headed into the Lisbon area and the storm did come in and hit the coast of Northern Portugal and Spain. From there we worked our way south. We had thought about going north but the wind was too strong. The boat is now in Rota, Spain not too far from Gibraltar. We will go back in March and take the boat to where ever the wind pushes us. I want to sail with the wind,” said Robertson. “I don’t want to be tacking the whole way.”

Judy Robertson is a certified Royal Yachting Association (RYA) Yacht Master Instructor, is an Instructor Evaluator with Sail Canada and is the founder of Nova Sail. She began sailing at the age of 10 and has never stopped. Throughout her life she has sailed the Eastern Seaboard to the Bahamas, the Turks and Caicos the Dominican Republic and to Antarctica from the coast of Patagonia with friends. Your Most Important Piece of Equipment

Into the Lion's Den