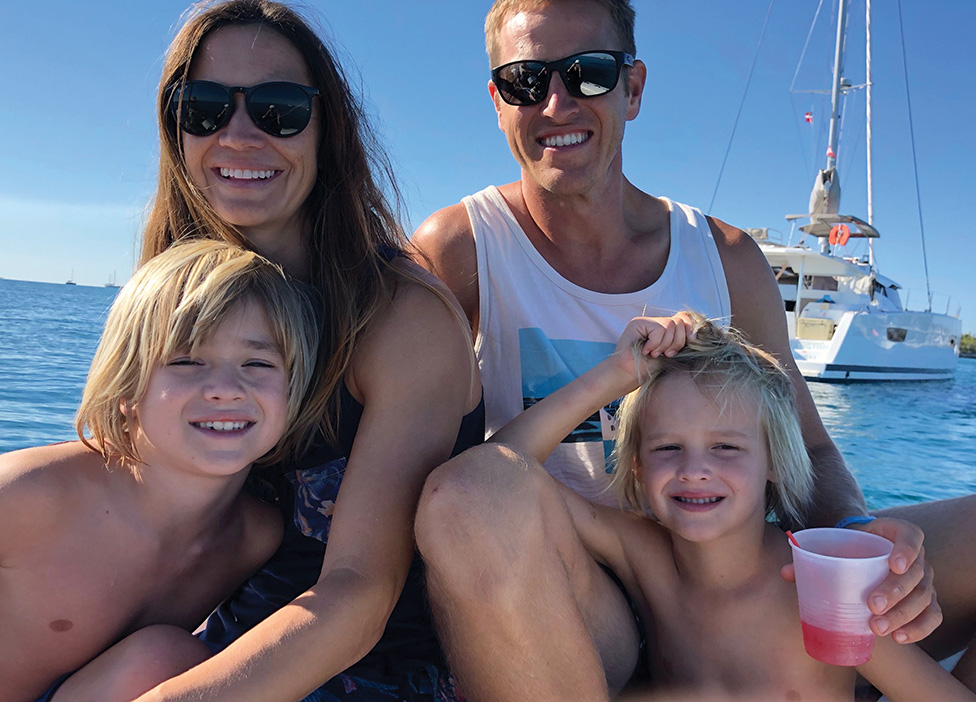 Wind in Their Sails: Nova Scotia Family Literally Living Their Dream on the High Seas

Above photo: Karen and Brad Cook along with their sons Ben and Charlie have been living life at sea aboard their 47-foot catamaran Hangtime for a year now.

For a year now, home for Brad and Karen Cook and their two sons, eight-year-old Charlie and Ben, 10, has been their 47-foot catamaran Hangtime, where every day is an adventure and the scenery never stays the same for very long.

“It’s pretty dreamy,” said Karen Cook when asked during an interview what it was like living at sea.

“I think it’s like anything. There are some days it’s really hard and hectic, things go wrong… yesterday was pretty crazy, but today is great. You take the good with the bad.”

After buying Hangtime in November 2017, the Cooks began their life-at-sea adventure last June, spending the summer sailing around the Maritimes with family and friends.

“I grew up in Antigonish so the whole family was there,” said Karen. “That’s why it was so special to have the boat there all summer. It was great. We were constantly out sailing.”

The Cooks left Nova Scotia in mid-October and headed down the eastern seaboard. “We weren’t making a lot of headway between the weather and not wanting to push too hard” with the kids aboard so they “sailed right into Manhattan” past the Statue of Liberty and docked in New York City where “the boys and I jumped off and Brad had some friends come aboard and they sailed it from New York to the Bahamas,” where the family met up and spent the winter sailing the Caribbean. 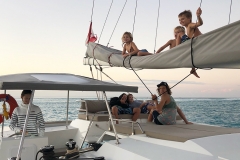 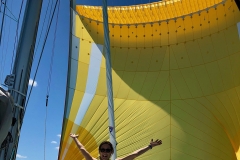 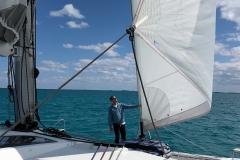 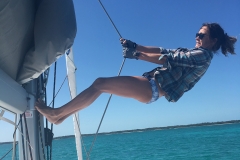 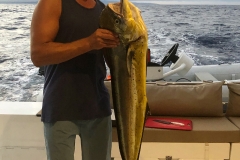 “We’re currently in the British Virgin Islands, we’ve been here about three weeks. Next week we will continue on to St. Thomas and continue down the chain. We’re trying to get these easterly miles under our belt. We’re almost as far as east as we’re going to go. Now we’ll head south. We expect to have some really nice sailing from here on out.”

“I didn’t understand the appeal of it really” but after spending a week on a catamaran a number of years ago “I realized a lifestyle at sea doesn’t mean you’re out slogging at sea all the time. There are water sports, you explore, there’s sunset sails… you have your house on your back and just go after that experience. I was a lot more onboard with Brad after that and it kind of gave us a goal to work toward. Brad never pushed. He just waited patiently in the background reading his sailing magazines just hoping one day I would get the bug. Lucky for both of us I did.”

Going into it, the Cooks were “pretty green,” said Karen. “Brad took a training course several years ago… I really had very little sailing experience so when we bought the boat in France, I just figured instead of learning on everyone else’s boat I’d learn on my own boat inside and out. The captain was a friend of mine and he had no problem with me coming along. Since then I’ve been taking classes through U.S. Sailing… we’re learning as we go.”

Cook said upwind capabilities, stability and liveability are among the advantages she sees with living on a catamaran as opposed to a mono hull.

“The living quarters are above the waterline with a bright beautiful salon and galley. That’s better than being down under the sea all day in my opinion.”

As for homeschooling the boys, “It’s all new to us but I think it’s going pretty well. They’re getting the hang of it. They have a good attitude about it so that’s the key thing. They know we have to do school, so they sit down and get it done. They like to learn, they’re smart, they like reading, they enjoy it so that makes it a lot easier than if they were putting up a fuss about it.”

The Cooks plan to sail to Grenada where “we’ll probably put the boat on the hard for a few weeks” this summer when they come back to Nova Scotia for a visit and “then continue southward so hopefully by the time the real serious storm season comes we’re far enough south we’re out of range. That’s sort of the plan,” said Karen.

“If we end up staying on the boat for an extended period of time, which is pretty likely, we’ll continue through the Panama Canel and to the South Pacific, if all goes well. That’s kind of what we’re thinking. If we’re enjoying it, having fun, and it’s good for our family, then we’ll keep going. If it gets to the point where we’ve had enough, we’ll just stop. We don’t really have an agenda in terms that we want to circumnavigate… We just want to enjoy it and if we stop enjoying it, then we stop.”

New Brunswick’s Largest Events for Boating, Fishing and the Outdoors Take Over Moncton This Weekend

‘Cream of the Crop’: World-Class Sailors to Compete at International Albacore Championship Regatta in Shelburne

No Replies to "Wind in Their Sails: Nova Scotia Family Literally Living Their Dream on the High Seas"