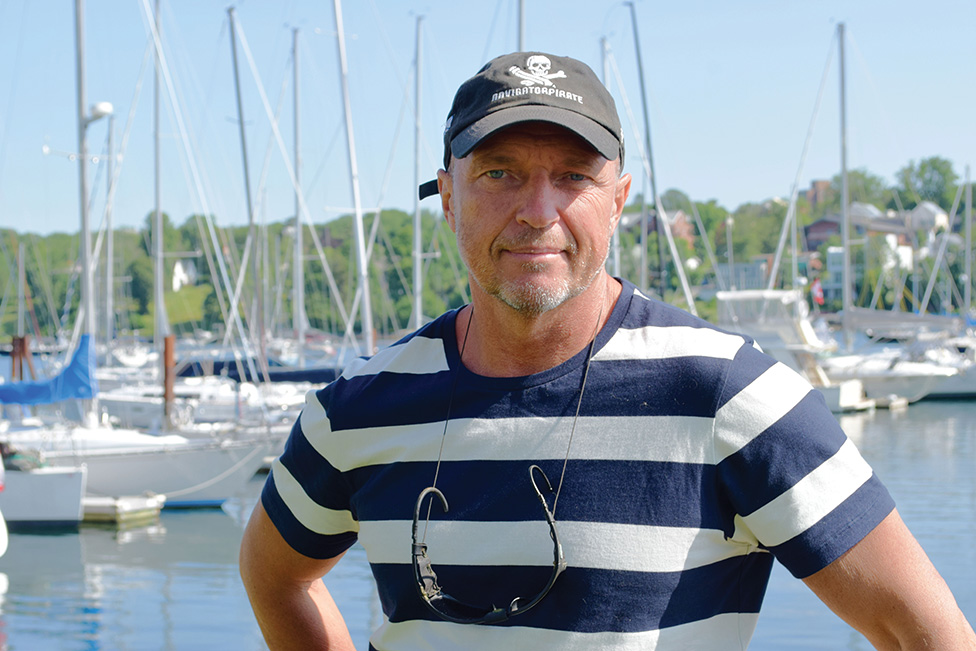 Above photo: While Halifax sailor Sergei Morozov is planning a second solo circumnavigation, his ultimate goal is to row around the world. Kathy Johnson photo

It will be by a different route when Halifax sailor Sergei Morozov casts off for a second solo sail around the globe — one that he hopes to start next year.

“This time I don’t want to go fast like the first one,” he said in a recent interview. “I want to take another route. This one I want to start from Europe because I wasn’t there for the last 20 years. I want to sail around the Mediterranean. I don’t want to go through the Panama Canal again,” but will chart a course for the Magellan Strait for passage between the Atlantic and Pacific Oceans.

Morozov completed his first solo circumnavigation on May 24, 2014, almost two and half years after leaving Halifax on Dec. 5, 2011.

To sail solo around the world “was my childhood dream,” he said. “From the time I was nine to 11 years old, I dreamt about it, I read books about it,” with Nova Scotia-born Joshua Slocam, the first man to singlehandedly circumnavigate the globe in 1898, his hero. 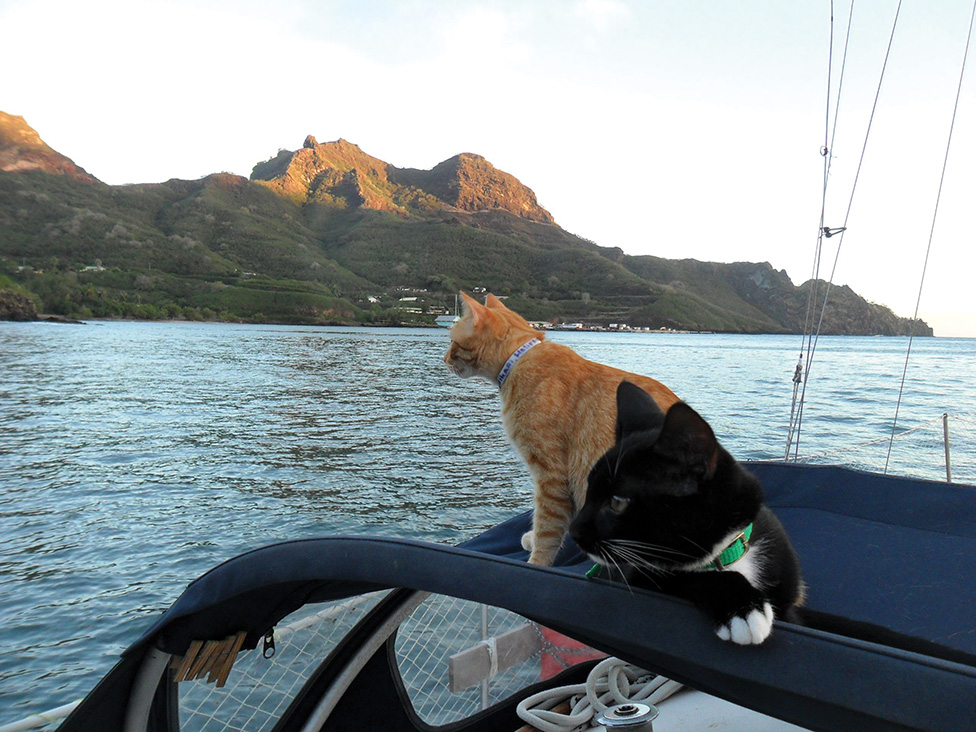 Miami and Ali, two of the cats that accompanied Sergei Morozov on his solo circumnavigation around the world, enjoy the view while passing by Nuku Hiva, the largest of the Marquesas Islands in French Polynesia. Sergei Morozov photo

Morozov went on to attend nautical institutions in his native Russia, earning degrees in seamanship and navigation with a specialty in deep sea navigation. By the time he was in his early 20s, he was fourth mate aboard the STV Kruzenshtern, the largest tall ship in the world.

A single father, Morozov put his dream on hold until his daughter Sasha had grown up.

“I said if no one needs me, it’s time to realize my dream,” purchasing a 1972 C&C 35 sailboat for $1,000. After five months of preparations and $20,000 in repairs, the Hikari was ready. Using a hand-held GPS and paper charts, Morozov set sail from Halifax to Bermuda, which turned out to be the worst leg of the voyage weather-wise.

With his sails completely ripped, Morozov spent one and a half months in Bermuda getting new sails made so he could continue. From there, Morozov made his way to the Pacific Ocean via the Panama Canal, where the Galapagos and Marquesas islands, Hawaii and West Samoa were ports of call.

Then it was on to the Indian Ocean where he lost his rudder off Madagascar and ended up spending three months in South Africa awaiting a new one.

For Morozov, this was the saddest part of the voyage. While in Mauritius, Port Louis, the homeless, three-legged cat he had adopted in the Grand Bahamas and named Ali was killed fighting a pack of dogs protecting Morozov’s other two cats, Tsilja and Miami.

“I never seen a cat with a personality like him,” he said. “Ali, he was a hero,” saving both the other cats who are still with Morozov.

Miami, who was born on the Hikari close to the city of Miami during the first circumnavigation is “my favorite,” said Morozov. “She’s a real sailor. She was overboard four times in three different oceans, the Pacific, the Indian and twice in the Atlantic and twice I jumped overboard to save her. She’s an extremely good sailor… she’s extremely brave.”

Both cats will be aboard when Morozov sets sail again. “Yes, of course the cats will be going. They are good company,” he said. 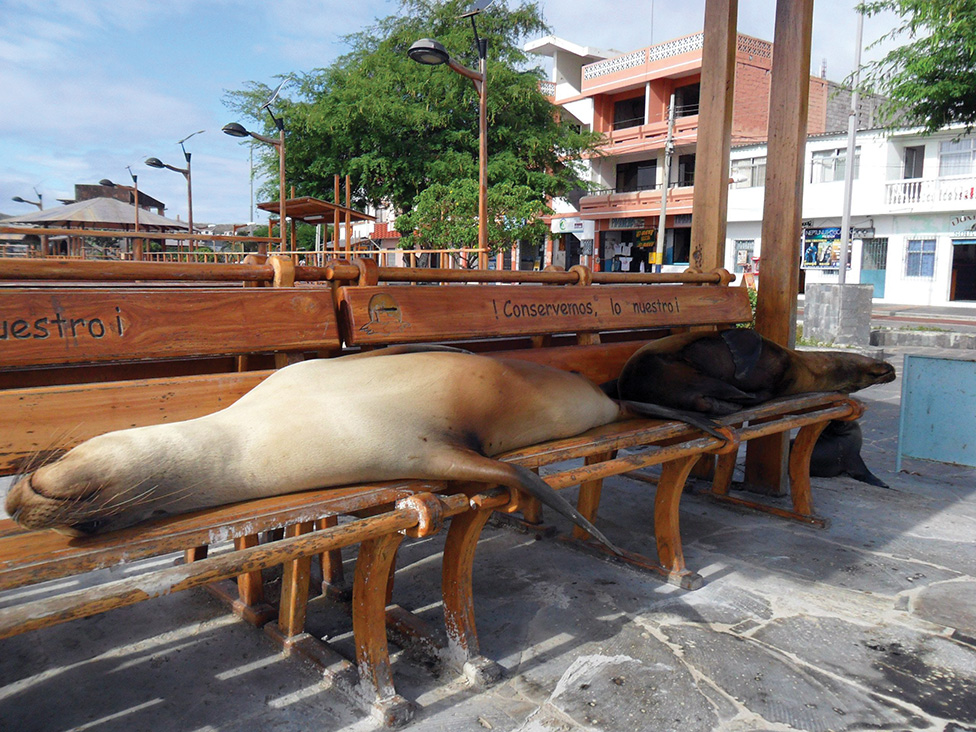 Sea lions resting on a bench in the city of San Cristobal in the Galapagos Islands was just one of the sights for Sergei Morozov. Sergei Morozov photo

This time, Morozov will be sailing an Irwin 37 1980 Bermudian sloop, due to arrive in Halifax this summer, that he plans to name Shambala.

Once the vessel arrives in Nova Scotia from the U.S., Morozov said he will begin preparing the vessel for the journey. “I hope to start next year,” he said.

Morozov’s ultimate goal is to row around the world, a feat never before done.

“It would be a new world record. Nobody has ever done it. People have rowed the Atlantic Ocean, the Pacific Ocean and the Indian Ocean, but never around the world. I’m still in good physical condition and mentally ready to go,” but it’s a “huge project and expensive” estimating it would take four or five years to complete.

The vessel would be a classic style ocean rowing boat; two cabins with a cockpit between them, but built to Morozov’s specifications. “Every person who wanted to row one of the oceans has built a boat for themselves, so I will do a boat especially for me.”

For a time, Morozov was trying to find sponsorship for his Row Around the World attempt, but has decided he will pay for it himself “so right now I’m concentrating on making enough money,” he said. 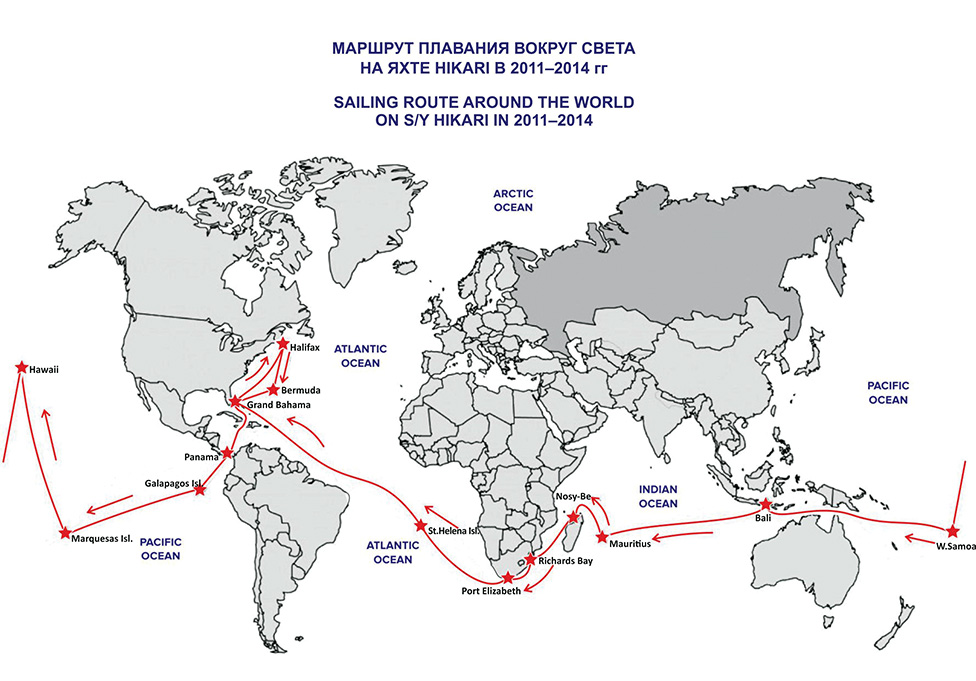 A map of Sergei Morozov’s sailing route around the world.

As a professional sailor, Morozov often delivers vessels for clients along the eastern seaboard. He has also written a book, When the Horizon is Screaming, due out this summer.

The book, which is being released in Russian, tells of Morozov’s sailing life so far, his solo circumnavigation and is packed full of information, said Morozov.

“There are seven chapters in the book. After every chapter is a lesson with lots of information about boats, sails, navigation, astronomy, everything about sailing that is major. You can’t go to the sea without this knowledge,” he said. “This book is for children who want to start to be a sailor and for experienced sailors. There’s a lot of information to help them to beat the sea.”

Morozov does intend to have the book translated into English.

Morozov has a blog, a YouTube channel and can be found on Facebook at Rowing Around the World. 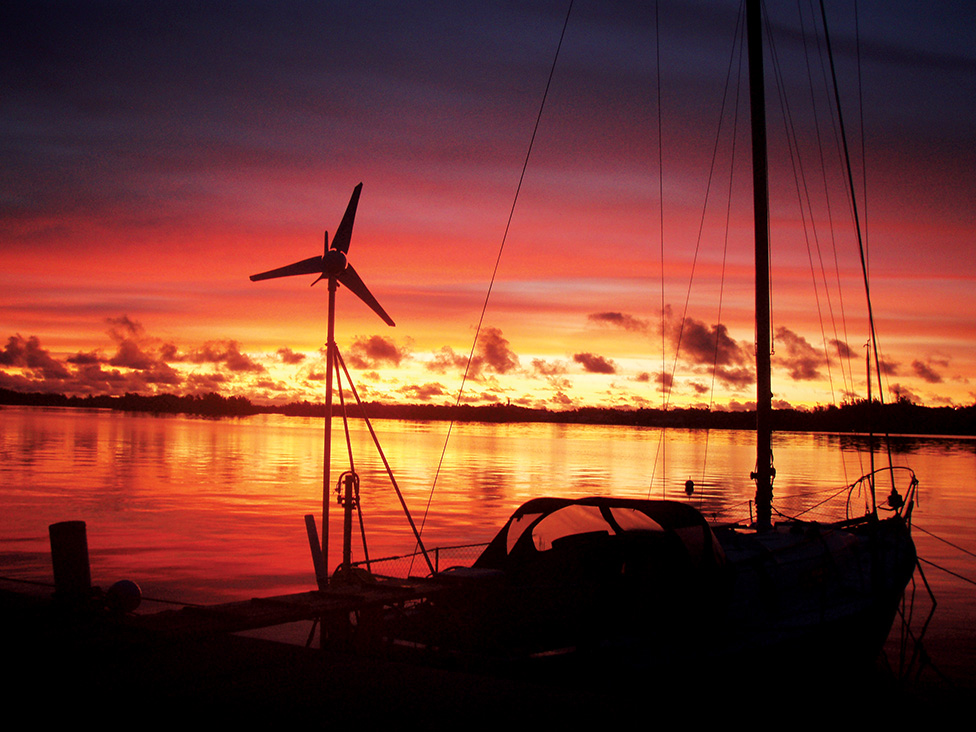 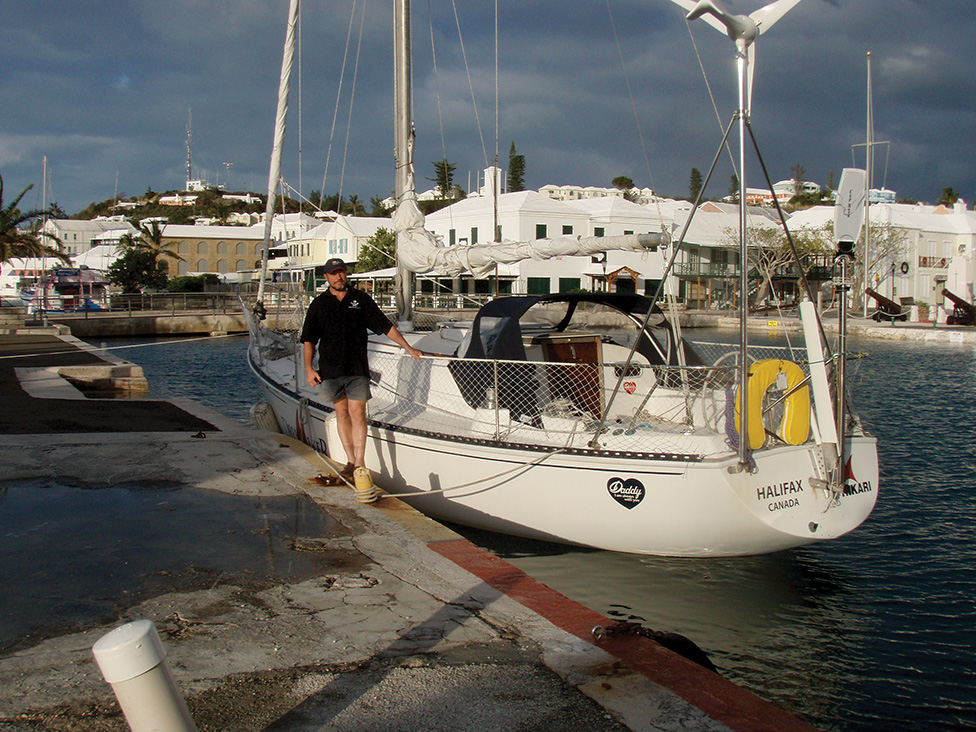 Batten Down the Hatches

Remembering Rudy: Looking Back on the Life of a Chester Legend

No Replies to "Around the Globe Again"