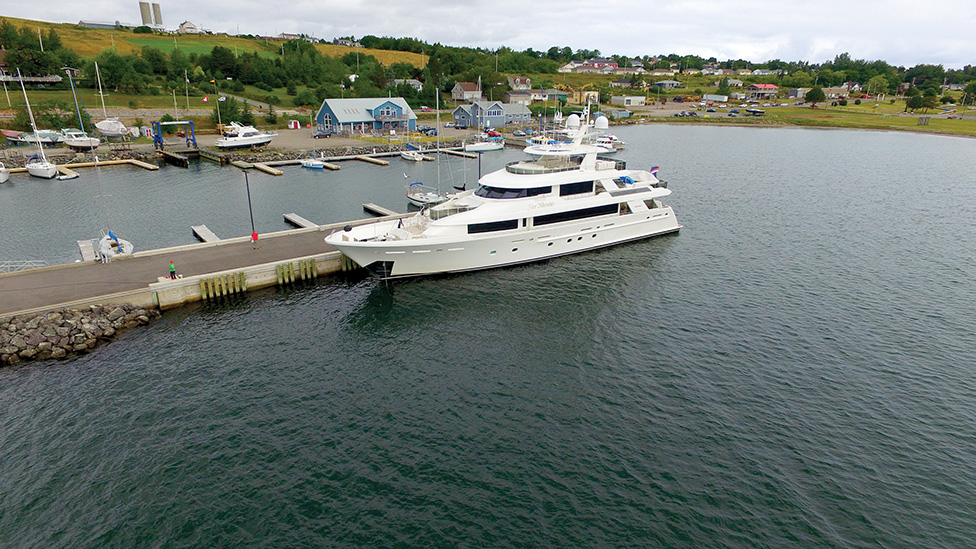 Above photo: The Northern Yacht Club in Cape Breton has made infrastructure improvements to better accommodate travelling superyachts. Contributed photo

“The major part of the project was the provision for a three-phase power upgrade to the outer dock so the larger yachts can plug in and not have to run their generators,” said John Astephen, Northern Yacht Club Commodore in an interview.

“That was the feedback we were hearing. We had four superyachts from the United States visit last year and that was some of the feedback we got in terms of services that would make their stay more enjoyable.”

An upgrade to the club’s water system infrastructure, the acquisition of a portable pump-out system, the installation of a light on the outer caisson and enhancing the club’s website for marketing purposes were among the other components of the joint project funded by ACOA through the Innovative Communities Fund (ICF). The club received just over $34,000 in funding for the project.

The Northern Yacht Club began improving its facilities to accommodate visiting superyachts several years ago after receiving two large rectangular caissons from Marine Atlantic. “They were upgrading their facilities at the time and had no use for them,” said Astephen.

The structures were floated to the yacht club and initially provided “somewhat of a breakwater for the marina,” said Astephen. “In recent years we’ve worked hard to improve its aesthetics and functionality. Now its a really nice-looking concrete facility, paved, that can accommodate superyachts up to 150-plus feet.”

Located on the northwest arm close to the entrance of Sydney Harbour, the Northern Yacht Club works cooperatively with the Port of Sydney to accommodate superyachts that make Sydney a port of call. “They see this as a great partnership too,” said Astephen. “They get a lot of cruise ships and sometimes they’re not able to accommodate a superyacht so we’re an option. We look forward to being able to accommodate. We enjoy getting visitors. We’ve always been a very welcoming club; a family club and it helps us financially as well when we can a large yacht in. It gives you a good shot in the arm and helps over the winter months.”

The Northern Yacht Club dates back to the 1940s. Over the years, the club has hosted numerous small boat racing events on the provincial, national and international levels. It holds an annual regatta every August.

When it comes to junior sailing, the Northern Yacht Club is one of the most active in Nova Scotia.

“The junior sailing program is basically the heart and future of the club,” said Astephen. “Its very active, certainly the most active in Cape Breton and is up there provincially in terms of numbers and participation. We have quite a large fleet of junior sailing boats including 420s, Optimist dinghies and Kingfisher prams.”

“The other feature we have that we run through the junior sailing program is the Sail Able Program,” said Astephen. “We’re quite proud of that. It makes sailing inclusive for everyone. We’re quite busy with that right now. We have one boat that can accommodate a couple of individuals at a time and we have a designated junior sailing instructor trained to assist, accommodate and coach participants in the Sail Able Program.”