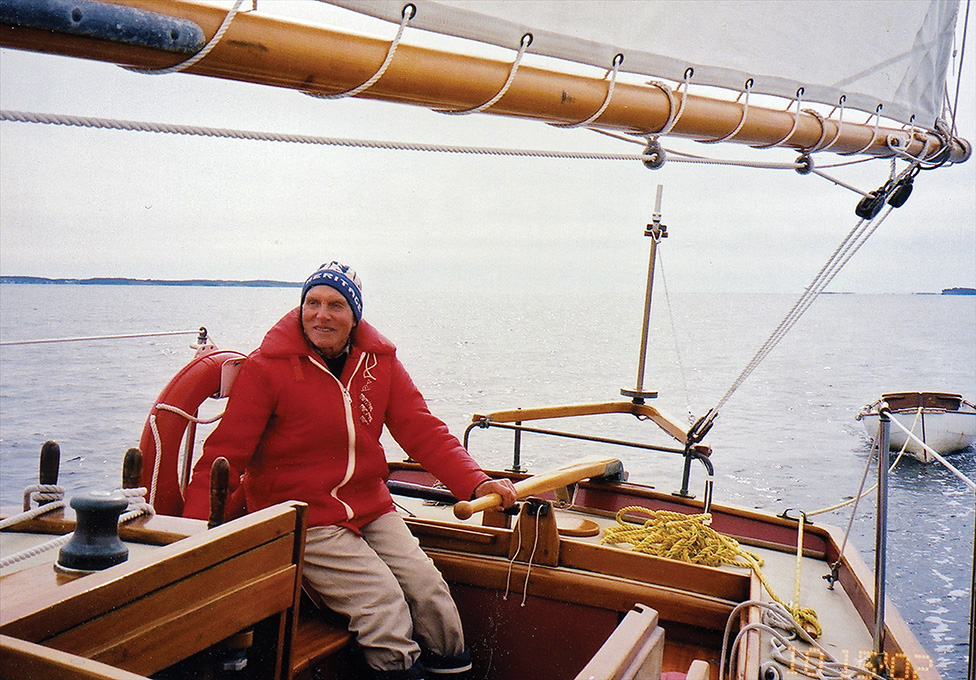 Remembering Rudy: Looking Back on the Life of a Chester Legend

There must have been a fair wind blowing the day the late Rudy Haase decided to move his young family to East Chester, Nova Scotia back in 1967.

A naval architect by profession, a sailor in the purest sense of the word and a conservationist through and through, “he did a lot for Nova Scotia,” said long-time friend Syd Dumaresq.

“He was just a wonderful guy. I would say Nova Scotia was lucky that he decided to move here with his family.”

“He was a mentor to me as an environmentalist in particular, but we both shared a mutual love of boats so we talked a lot about sailing,” said Dumaresq. “He would often tell me stories about sailing. He loved the sea and sailing.” The last sail for Rudy Haase was a few months before he passed away with his long-time friend Syd Dumaresq.

Married aboard a schooner in Maine to his wife Mickie, when the couple arrived in Nova Scotia with their three sons, so did the 38-foot Diablesse, a trysail wishbone ketch designed by Fredric (Fritz) Fenger, who was a well-known yacht designer, said Dumaresq.

“Rudy loved that boat. He told himself he would keep the boat for 50 years and he kept it in beautiful shape. When the time came that he wanted to sell it, he put an ad in some wooden boat magazine in Maine and said a combination of why you want my boat and how you’ll keep it up and price for the boat” is who would get it. “Of course, a guy with not much money, but a good story got the boat and Rudy was quite happy.”

After moving to East Chester, Rudy got to know the Barkhouse brothers, who came from a long line of wooden boat builders and operated a boatyard, producing Bluenose class sloops. Haase ended up buying the boatyard and renaming it the Bluenose Boatyard.

“For many years he would produce one boat a winter,” said Dumaresq.  “If he didn’t have a client, he would build it on spec and sell it in the spring.

“When he sold the Diablesse he bought back one of the little schooners he had built for a local guy and he sailed that for a long time singlehanded up the Eastern Shore. There’s a place called Sheltered Cove that’s very famous with the sailors. Rudy bought that many years ago and put a conservation easement on it and he kept it wild forever. He would often sail singlehanded from Chester to Shelter Cove about an 80-mile sail, there and back, happy as could be.”

While sailing and boats were always a big part of Hasse’s life from a young age, it was for his environmental and conservation efforts that he is best known.

“He was always connected with boats,” said son Bruce in an interview. “His dad had boats… he was very involved in sailing. As kids growing up, we learned how to sail, navigate, how to handle small boats and to be respectful of the weather and ocean. That you always had to be diligent about it and never take anything for granted. It certainly developed a level of confidence that put us in good stand.”

Rudy’s conservation efforts began in 1954 when he helped form the Friends of Nature Conservation Society in Maine. “He did things all over the world. He helped create the National Park system in Costa Rica, to reforestation in Kenya, to redwoods in California. He was very active in conservation issues,” said Haase.

“He was always passionate about it. He was the epitome of how one person can truly make a difference in what they do, whether its a conservation cause or getting involved in the community. A lot of people respected him for that. He did make a difference. Some people forget as one person you can influence if you’re committed and dedicated.”

In Nova Scotia, “he was a pioneer in land conservation,” said Dumaresq. In 2015 he was awarded the Order of Nova Scotia for his environmental efforts.

“Rudy’s commitment to nature is legendary,” reads his Order of Nova Scotia biography. “He was the first landowner to donate a conservation easement to the new Nova Scotia Nature Trust, protecting a tract of land on the Bras d’Or Lakes in 1996. His second easement protects four spectacular coastal islands on the Eastern Shore. This area’s wilderness jewel is a forest-encircled sheltered cove with magnificent twin beaches. Rudy worked for over 20 years to protect and acquire the peninsula, which, thanks to his and others’ donations, is now owned by the Nova Scotia Nature Trust. His third easement, on his home property, protects the woodland surrounding Goat Lake in Chester.”

A Friends of Nature Conservation Society was also formed in Nova Scotia by Rudy and is still very much active. “His wife Mickie was very much a part of the scene too,” said Dumaresq who serves as society chairman.

Dumaresq said the Friends of Nature are keeping Rudy’s memory alive, by awarding a scholarship each year to local high school graduate, as well as other initiatives.

“We put a plaque in the garden in Chester because he loved nature so much and we’ve planted a tree at the municipal building and we’re going to put a plaque on that and he donated about 10 acres along the Gold River so we’re in the process of getting a plaque on that piece of land. He is well remembered around the village.”

No Replies to "Remembering Rudy: Looking Back on the Life of a Chester Legend"