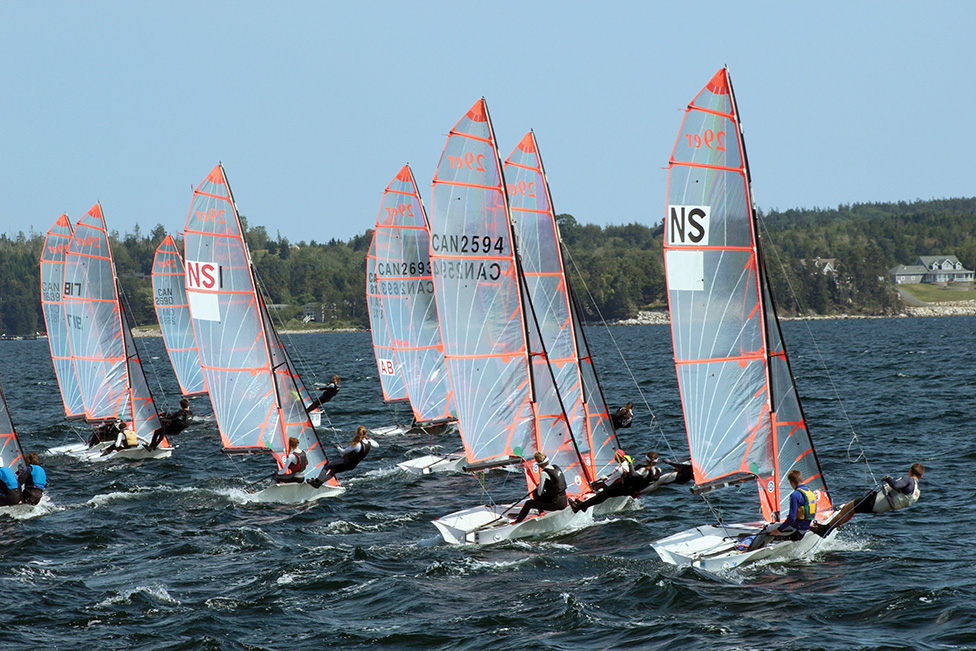 Above photo: The 29er class leaves the start line during the 2017 Youth National Championships at the St. Margaret Sailing Club. Frank Denis photo

There were fair winds for Sail Nova Scotia in 2019 leading to a positive outlook for 2020 which will see a full-time skiff coach hired for the province through a partnership agreement with the Royal Nova Scotia Yacht Squadron (RNSYS) and Canadian Sport Centre Atlantic.

“This is going to be a great asset to the program,” said Frank Denis, executive director of Sail Nova Scotia, adding the hope is to have the coach in place by February.

Looking back at 2019, it was a successful year, said Denis.

“The Shelburne Harbour Yacht Club hosted a very successful Albacore International Regatta in August. It was one of the best ever sailing events hosted in this province,” said Denis, and earned the club the 2019 Regatta of the Year award at the annual Sail Nova Scotia awards presentation on Nov. 16 in Halifax.

Sail Nova Scotia hosted National Championships for the J24, Club 420 and C&C 99 classes in 2019. “All were a success and solidified Nova Scotia’s reputation as a great place to host regattas,” said Denis.

The Youth Learn to Sail programs reported an increase of 30 per cent in participants in 2019, with close to 1,400 youth taking part in the program across the province, said Denis, adding a new technical director, Lisa Ross, was hired in 2019 to work with the clubs offering Learn to Sail programs.

Nova Scotia sailors made up 50 per cent of the 10-person Team Canada that competed at the Youth World Championships in Poland. “We produce a lot of top-notch sailors,” said Denis. “We had five of 10 at the world juniors this year. In 2016 at the Rio Olympics, four of nine on the Canadian sailing team were Nova Scotians, so when you think about it, we’ve got less than 1 million people and the rest of Canada has 35 million so to get half of them coming from here is quite something.”

Looking towards the Tokyo Olympics in 2020, “we’ve got four athletes, up to six who are in a position” to qualify to represent Canada at the games, said Denis.

Two of the sailors who have their sights set on qualifying for the 2020 Tokyo Olympic Games are Nacra sailors Allison Surette and Max Flinn, recipients of the 2019 Sail Nova Scotia Legacy Fund Award. In 2019 they represented Canada at the Pan Am Games in Peru, competed at an Olympic test event in Enoshima, Japan, as well as the World Championships. The award will support their training up until the Olympic qualification event this winter.

Other sailing athletes recognized by Sail Nova Scotia in 2019 include Male Youth Sailor of the Year Ryan Anderson from the RNSYS. Anderson is described as “one of the top youth sailors in Canada” who “had a strong finish to his youth career in 2019.” Ryan made the switch to the men’s Olympic Class boat at the Canadian Senior Championships in the summer. In his first senior men’s event Anderson finished 13th overall just behind the national team athletes.

Gabby Rafuse, also from the RNSYS, was named Female Youth Sailor of the Year. Rafuse was selected to be on the Canadian Opti team to represent Canada at the North American IODA event in Nassau in the fall and was the only Atlantic Canadian to attend. At the 2019 Canadian Opti Championships she finished 20th in the 120-boat fleet and won the Club 420 class at the Kennedy Cup with Molly Anderson.

Evan Petley-Jones, RNSYS, was named Male Sailor of the Year. In 2019 Petley-Jones placed second at IOD Worlds, won the J24 National Championships, and the IOD fleet at Chester Race Week on his boat Bella, beating eight other boats. He also participated in the J24 US nationals (sixth) and J24 Midwinters in Annapolis and finished sixth overall at the 2019 J24 Worlds in Miami in the 79-boat fleet. Allison Surette and Max Flinn are the recipients of the 2019 Sail Nova Scotia Legacy Fund Award. In 2019 they represented Canada at the Pan Am Games in Peru, competed at an Olympic test event in Enoshima, Japan, as well as the World Championships. The award will support their training up until the Olympic qualification event this winter. Frank Denis photo

Jesleine Baker, RNSYS, was named Female Sailor of the Year. Winner of Distance 4 at Chester Race Week 2018 and 2019, and winner of Bravo 1 in 2017, this is Jesleine’s third year in a row of winning her very large and competitive fleet in Chester on her J30 Just Add Water.

The President’s Award, which is awarded to an individual who has made an outstanding contribution to the sport of sailing over the years was presented to Dean Baldwin, Northern Yacht Club. Baldwin is a lifelong sailor, has had a very accomplished career in the Canadian Navy and is currently an instructor at the Canadian Coast Guard College. Albacores sail in Shelburne Harbour during the 2019 International Albacore Championship sailing regatta hosted by the Shelburne Harbour Yacht Club from August 24 to 30. The event was named regatta of the year by Sail Nova Scotia. Kathy Johnson photo