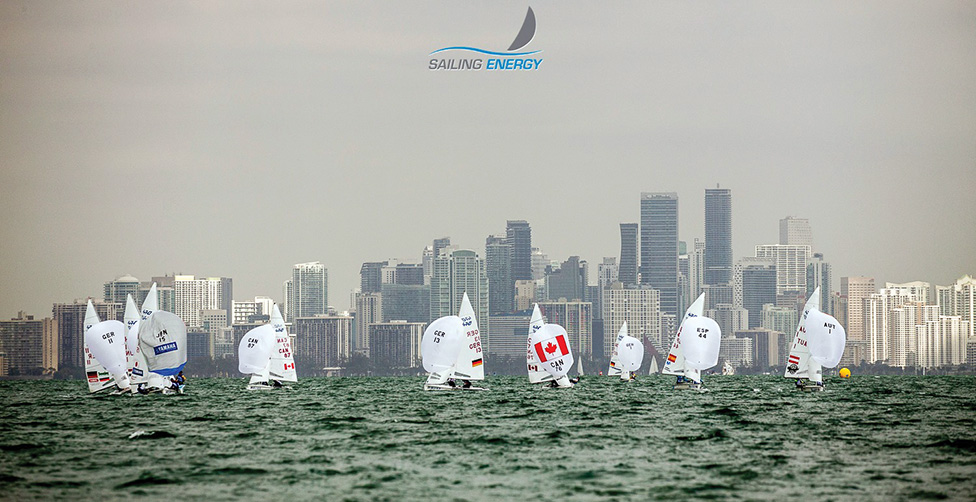 Halifax, Nova Scotia sailors Jacob Chaplin-Saunders and Oliver Bone haven’t let COVID-19 sidetrack them from their goal of making an Olympic comeback in the 470 class.

The team had qualified Canada as one of 20 countries for the 2020 Tokyo Games in January at the 2020 Hempel World Cup Series in Miami and were leading the trials to be selected as Canada’s Men’s 470 team when COVID-19 sent the world into lockdown late last winter.

They were just days away from competing in Olympic trials in Europe when the lockdown came, one on each side of the Atlantic.

“On March 12, I was on my way to Spain to compete at two events in our trials,” said Saunders in an interview. “Just a few days before the events were to start, they were cancelled. Oliver was already in Spain when this happened. I was fortunate to be able to cancel my flight just four hours before I left.” For Bone, the experience “was kind of surreal,” he said. “Nobody really knew what was going on. We knew it was bad and getting worse. Here we are trying to get geared up for a world championship, one of two Olympic qualifiers and all of a sudden, we get the word the worlds are cancelled… It was a mad dash to pack everything up properly,” adding getting a flight home was “a nightmare. I spent more money on getting my bags home than it cost me to get to Europe with all my bags originally.”

After returning to Canada, Bone said he spent a lot of time doing yoga during his 14 days in self-isolation, live streaming sessions so people could follow along.

Saunders said when lockdown first started, his routine changed to work from home, which enabled him “to go out, pick away at some boat work the boat needed so it would be ready to train when we were allowed to and I was doing plenty of fitness in my living room, getting good support from Canadian Support Centre Atlantic.”

The two are back on the water now, sailing out of the Royal Nova Scotia Yacht Squadron three times a week.

Bone said “it’s great to be able to carve out nine or 10 hours a week” on the water from a busy work schedule.

Both Saunders and Bone are veteran Olympians. Bone competed in 2008 while Saunders was in Rio in 2016 with his brother Graeme.

After the 2008 Olympics, Bone started coaching and has worked with several successful youth teams. Last summer he decided to come out of retirement to team up with Saunders for one more shot.

Halifax sailors Jacob Chaplin-Saunders (left) and Oliver Bone compete at the 2020 Hempel World Cup Series in Miami in January, where they qualified Canada as one of 20 countries for the 2020 Tokyo Games and were leading the trials to be selected as Canada’s Men’s 470 team when COVID-19 sent the world into lockdown late last winter. Contributed photo.

“Teaming up with Jake worked out very well,” said Bone. “We compliment each other and work with each other very well. It’s good to be back in the boat and competing at this high level. It feels like we’re doing slightly better than what we thought.”

After the 2016 Olympics, Saunders went back to school, got his engineering degree and started working before deciding to make a comeback with his old coach. “We thought we’d give it a shot to qualify for the Tokyo Olympics,” said Saunders.

With tentative plans to hold the Tokyo Olympics in 2021, it’s not known yet when the next trials will take place.

Saunders said the team is thankful to the community for being supportive.

“A lot of people reached out during the COVID-19 lockdown,” he said. “It is kind of a reminder of how much a luxury it is to be able to travel the world and race sailboats and realize when something like a pandemic hits, it’s not the most important, crucial thing in the world but I’m glad to see things getting under control in Canada and we’re able to get out sailing again.”

Saunders said the team is always looking for support. “It’s a crazy expensive sport. We’re able to do it on the cheap a little bit but coming back was meant to be eight months. That’s stretched into a year and half.”

Support for the team can be done through their Wind Athletes Canada page (https://www.windathletes.ca/athletes/saunders-bone).

‘So Far, So Good’ for Summer Sailing Season in Atlantic Canada

Antares 11: A Weekender that Hits the Right Note