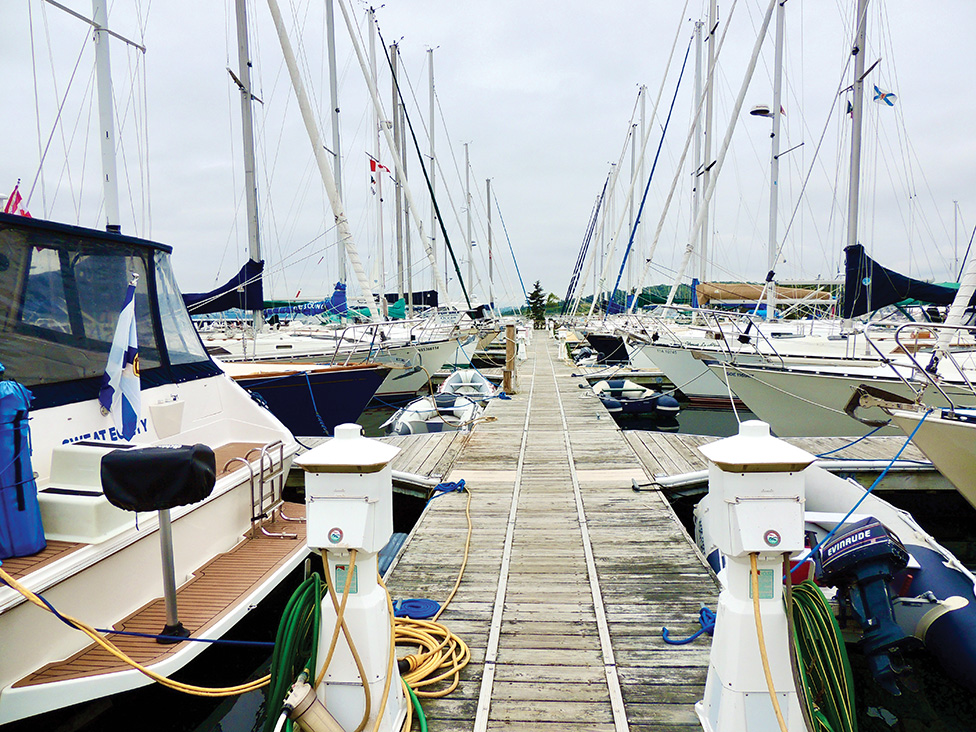 Spirit of Boating and Comradery Strong at Dartmouth Yacht Club

Above photo: Vessels lay berthed at one of the docks at the Dartmouth Yacht Club. Contributed photo.

It is all about boating, be it by motor or sail, at the Dartmouth Yacht Club.

“The spirit of boating together is strong at the Dartmouth Yacht Club,” said Commodore Steve Snider in an interview. “I find when people go through the gates, there’s no pretences. It’s all boaters together.”

Located in Wright’s Cove on the eastern shore of Bedford Basin, the Dartmouth Yacht Club was incorporated in 1962 as a non-profit organization.

Rear Commodore Barry White agrees. Once at the club, “the focus becomes your boat and the boats around you,” he said. “One thing I’ve noticed is how helpful people are to each other when working on their boats in the yard. It’s quite remarkable the comradery that comes from that.” The view from the member’s lounge at the Dartmouth Yacht Club. Contributed photo.

White said the other thing he finds “quite impressive” about the Dartmouth Yacht Club “is the range of facilities available. The standards of the docks are nice and high. We have a relatively new marina system. There’s power and water on the docks. The ability to have your boat hauled just by making an appointment. It’s so straightforward.”

Two years ago, the Dartmouth Yacht Club celebrated the official opening of a new clubhouse.

“It’s quite a nice facility,” said Snider. “It’s new and modern, facing the water with a nice view and sufficient bar space to accommodate all of us boaters when at the end of a long day of racing or a day boating around the basin or out through the harbour to have a refreshment.”

With a membership of around 360, “we have a good mix of power boats and sailboats at Dartmouth Yacht Club,” said Snider.

White estimates the club’s fleet is comprised of about two-thirds sail and one-third power vessels, a split that has been pretty constant since he joined in 2006. “Even with growth, it’s proportionately growing, so that’s good to see.” A deck with a waterfront view at the Dartmouth Yacht Club provides a relaxing spot for members. Contributed photo.

While COVID-19 “has been a challenge” for the Dartmouth Yacht Club, “new membership is brisk” this year, said Snider. “In last two months, we’ve had upwards of 20 new members.”

The club has been able to tack its way through the ever evolving COVID-19 public health guidelines to the point where they are hosting club activities and learn to sail programs this summer.

“As the rules for health safety evolved, we kind of moved along with that and fortunately we were able to accelerate much of the programming,” said White. “Once the allowance to have 10 people together without social distancing (was made), that immediately opened up all the possibilities for just about normal racing for us. That spilled over to the learn to sail programs and groups. We had to have a lot of things in place we never had to have before but we were able to pull it out of the hat. It’s probably not quite as large a program this year but it’s quite substantial from what I’ve seen on the water. It looks like a lot of young people are enjoying themselves tremendously.”

The Dartmouth Yacht Club is primarily focused on club activities this summer. One new event, a family fun day pursuit race “had its origins in the restraints we faced and it worked out very well,” said White. “We got very good feedback on it. The people who participated said they would love to do it again so we’re going to do it again in August.”

Under normal operations, the Dartmouth Yacht Club has a social program that spans most of the year, said Snider. While COVID-19 has caused the cancellation of some events, “we’re in a much better place and happier place than what we thought we were going to be say five weeks ago.”

A view of the convoy hall at the Dartmouth Yacht Club. Contributed photo.

Antares 11: A Weekender that Hits the Right Note