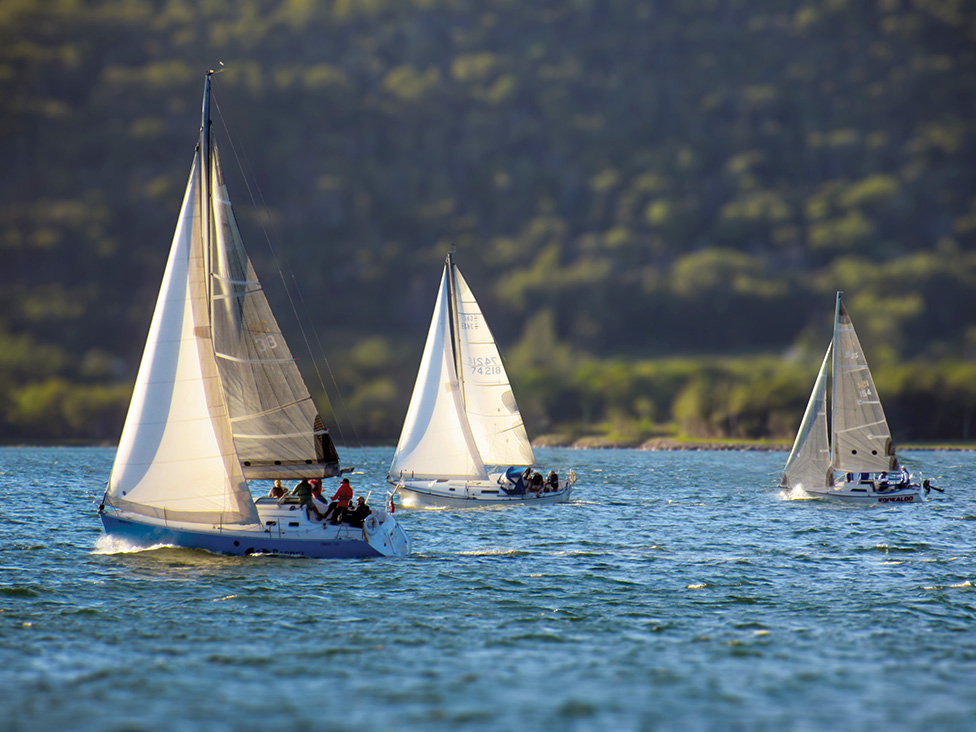 Plans are well underway for another great summer of boating and sailing at the Ben Eoin Yacht Club on the Bras d’Or Lake in Cape Breton. A drone view of the Ben Eoin Yacht Club and Marina in Cape Breton. Contributed

The claws of uncertainty that Campbell is referring to is COVID-19. “We are very fortunate our members are more than willing to comply with the restricted governance we put in place (for COVID-19) whether it be in the boat shed or during a race weekend,” he said.

Last summer, the Ben Eoin Yacht Club ended up expanding its summer weekly sailing series into the fall season for the first time. “We plan to do it again in 2021,” said Campbell. “It was basically two series.”

The Club will also be hosting its yearly regatta this summer. “The regatta attracts boats from around the lake and from as far away as Halifax,” said Campbell. “It’s two weeks prior to the Baddeck Regatta so there’s good interaction on the lake, great inter-racing.”

More than racing, “we also do social cruising as well and we have our poker runs for our motorized vessels,” said Campbell.

Completed in 2012, the Ben Eoin Yacht Club and Marina has been doing quite well, said general manager John Williams, with a steady increase in boating traffic from the beginning.

With the exception of mechanical service, the club has a full-service marina, said Williams, including a boat ramp which is used for daily boat launchings and will accommodate vessels up to an eight-foot draft, a fuel dock which carries diesel and premium gas for members and other boaters, a sewage pump-out service for members and is available to the boating public for a small fee, as well as a mast crane and a 20-tonne travel lift.

“We cater a lot to our membership and the local community and we also encourage visitors that come into the Bras d’Or Lake either though St. Peters or the Seal Island entrance” to stop in, said Williams.

The marina has 68 berths for members that are available for seasonal usage and five more berths for visitors or transients. The Ben Eoin Yacht Club and Marina has berthage for more than 70 vessels. Contributed

The Ben Eoin Marina “is the only yacht club that services the urban area of Sydney that’s on the Bras d’Or Lake,” said Campbell, noting the Northern Yacht Club services boaters and sailors in the North Sydney area.

First time marine visitors to Ben Eoin are “amazed at the area,” said Campbell. “They are pretty excited when they see the facility. They say it’s one of the nicest areas and marinas they’ve ever been to,” noting “one of the nicest golf courses around” is located nearby. In the summer months, when the population of the local community more than triples with summer residents who are looking for some entertainment, “outside of COVID-19 we do some community things,” said Campbell, such as hosting open mike night at the club house which “makes it a popular spot.”

The club’s sailing school, which has been in operation for six or seven years has “been very successful,” said Campbell.

“We started out with the Sail Nova Scotia mobile school and we acquired our own fleet and we’ve been expanding that fleet and the number of instructors so now we’re starting to get into home grown instructors, youth who have taken the programs and worked they way up to instructor level.”

While the sailing school caters primarily to the eight to 16-age group, the school also offers some adult learn to sail programs like ladies night, said Campbell.

“Recently we’ve been offering enhanced navigation programs and have some additional courses coming in 2021 around boat safety, boat handling and boat maintenance programs.”

While COVID-19 will continue to play a role this season in operations, the Ben Eoin Yacht Club and Marina is able to use the lawn area and outside decks to host social aspects of events, such as the yearly regatta.

The Ben Eoin Yacht Club and Marina is located on the south shore of the East Bay of the Bras d’Or Lakes, a 25-minute drive from downtown Sydney.