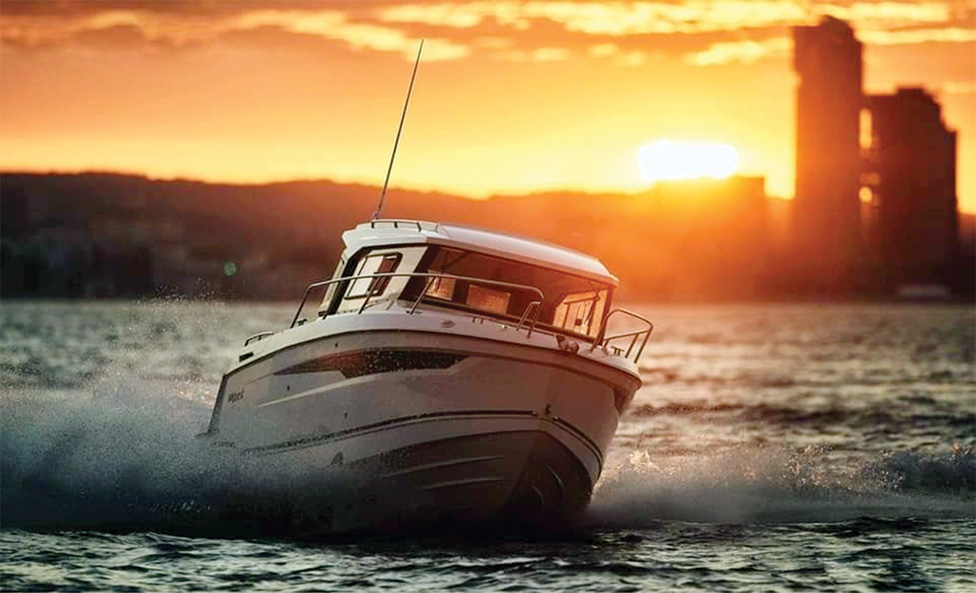 Parker continues to develop its range in sizes where the market is very competitive, multiplying the models. Like this 760 Quest, one of the last helmsmen to emerge. With its stepped hull and neat fittings, it does not lack any assets to rub shoulders with Jeanneau Merry Fisher and Bénéteau Barracuda.

Opens, day cruisers and helmsmen, and of course a high-end 11-metre cabincruiser (Monaco) powered by twin engines… Here is a summary of the extent of range of the Polish yard Parker which broadens its offer a little more every year.

With the 760 Quest, presented in Düsseldorf in January 2020, Parker fills the void between the 660 and the 790 Explorer, available in Weekend versions or Pilothouse. More compact than the 790 Explorer, the 760 Quest also features a stepped hull, one of the hallmarks of Parker who is quite fond of this type of equipment and which proves, if necessary, that the planing hulls have definitely colonized the helmsman sector.

For the rest, we find the characteristic aesthetics specific to the builder, starting with an aggressive line, with its straight windshield and its contoured cap which give it a style of a sport fisherman, enhanced by enough side hull portholes. Long platforms are also very present on-board units distinct to Parker and those of the 760 Quest are no exception to the rule. Its equipment and its deck plan make it quite versatile, and mainly intended towards the practice of small cruising rather than fishing. The comfortable cabin, associated with a complete bathroom, and the presence of a kitchenette and a transformable interior square as an extra bed tend to prove it. Ditto in the cockpit where the large L-shaped bench betrays a family vocation. In the cockpit, access to the sea is carried out on the starboard side, from a gate which leads to the bathing beaches, here covered with SeaDek. Both are hollow and conceal, one the bathing ladder, the other a chest which will prove to be ideal for wet storage. The motor goes up against the transom, which is formed in its central part of back of the bench. This one, mounted on rails, moves towards the wheelhouse to provide enough space for the powerhead when it is raised. The cockpit offers ample storage, to start by the lockers under the foundations of cockpit seating, but also under those located on the deck. Access to the wheelhouse (which closes with a sliding door three-leaf) from cockpit is on one level. The configuration of interior fittings is very classic, with a saloon to port, which faces a kitchenette and cockpit. On the other side, the back of the bench swaps and can thus leave the passenger the choice to be back or in the direction of travel.