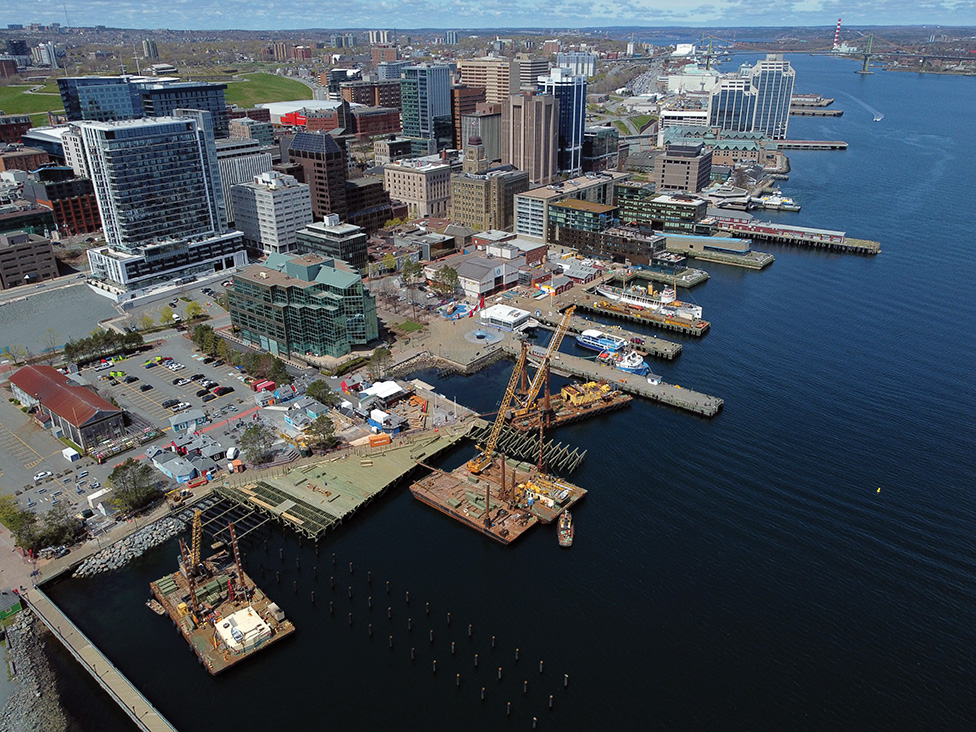 Above photo: Located in the heart of the Halifax waterfront near Salt Yard, is the new Foundation wharf featuring 30,000 square feet of boardwalk and nearly 500 feet of additional floats accessible for free daytime berthage with overnight rates.
Develop Nova Scotia photo

From $14.2 million in infrastructure projects to the creation of informative boating guides, Develop Nova Scotia and its partners have been improving the province’s marine destination network with an eye to further enhancing the province as a global destination for boaters.

In 2020, Develop Nova Scotia completed a three-year Marine Visitation Plan to identify and inform recommendations for the revitalization of strategic waterfronts around the province. Guided by the plan and with support from the Atlantic Canada Opportunities Agency (ACOA), the province and local project partners, six infrastructure projects including wharf refurbishments, floating docks and support services have been undertaken in Mahone Bay, Lunenburg, Baddeck and Halifax.

“Everything we do is built for community first, for locals,” said Adam Langley, Director of Marine Operations and Development for Develop Nova Scotia.

“With the infrastructure in place for community, we work to foster economic opportunities that build on this foundation, including marine tourism which has great potential. That’s why we’ve undertaken this initiative to shine a light on the opportunity Nova Scotia has to be an extremely desirable global destination by water. In order to do that, we have to have the supporting infrastructure. Not just wharves and floating docks, water and power, we also need to consider what people can do when they get there, how are they treated, what the service is like.”

While marine infrastructure such as wharves, floating docks and necessary services are first and foremost, “these are also platforms for communities to build upon,” said Langley.

“Think of the Halifax waterfront as a giant marina. Think of all the other business and events people come to the waterfront to experience. It’s not just about building marinas. It’s about building community assets to be leveraged in many different ways. It’s building a community from the water in.”

During the first phase of the Marine Visitation Plan, “we spent time identifying existing marine infrastructure around the province in order to inform recommendations for investment to develop a strategic provincial network of connected destinations supported by infrastructure, services and visitor experiences,” said Langley.

Out of that review, Develop Nova Scotia identified a significant gap in northern Nova Scotia, specifically on the Bras d’Or Lake where there wasn’t strong infrastructure to attract meaningful visitation, said Langley.

The Baddeck Wharf has undergone significant reconstruction and stabilization, with 438 feet of new floating docks and gangways added. The project was done in partnership with ACOA, Victoria County and the Village of Baddeck.

The project makes Baddeck “an anchor port for the Bras d’Or Lake and a nice bookend to existing infrastructure at St. Peter’s and Ben Eon,” said Langley. “Now the Bras d’Or Lake has stronger appeal because it has the necessary supporting infrastructure for visiting boats that want to be able to comfortably access the wharf and explore the community.”

In Mahone Bay on Nova Scotia’s South Shore, the lack of public access was identified as an issue, said Langley. As a result, 88 feet of new floating docks have been constructed and installed at the Mahone Bay Civic Marina to welcome transient boats with overnight docking available. The project was done in partnership with the marina and Town of Mahone Bay.

Infrastructure improvements were also undertaken on the Lunenburg and Halifax waterfronts, which are both owned and operated by Develop Nova Scotia. “We continue to strengthen the waterfront in Halifax, the primary gateway to Nova Scotia, and also in Lunenburg,” said Langley, noting they are the two most-visited places in Nova Scotia for mariners.

Nearby, several wharves have been reconstructed supporting the working waterfront, and in time for the 100th anniversary of Bluenose. In addition, the Big Boat Shed at the Smith & Rhuland Shipyard has been restored and reopened as a working boat shed and an interpretive centre for the Fisheries Museum of the Atlantic.

Three projects have been completed or are nearing completion along the Halifax waterfront. At the Halifax Waterfront Marina is the addition of Foundation Wharf. Located in the heart of the waterfront near Salt Yard, the wharf features 30,000 square feet of boardwalk and nearly 500 feet of additional floats accessible for free daytime berthage with overnight rates.

The Acadia Wharf, adjacent to the Maritime Museum of the Atlantic, is being extended by 60 feet and will support a future on-water small craft exhibit, boat school and the permanent berth for CSS Acadia. Improvements to marine infrastructure in Baddeck was one of the projects recently undertaken by Develop Nova Scotia in partnership with ACOA, Victoria County and the Village of Baddeck. The Baddeck Wharf has undergone significant reconstruction and stabilization, with 438 feet of new floating docks and gangways added. Develop Nova Scotia photo

The Marine Visitation Plan also included the creation of a number of resources such as the Nova Scotia Boating Guide. Available online (www.novascotia.com/boating) or as a hard copy, the guide contains a directory of clubs and marinas and related marine resources in the province as well as suggested itineraries.

A Halifax Boaters Guide map has also been created in conjunction with the Port of Halifax, Sail Nova Scotia and other partners. It is available online from Halifax based Marinas and Yacht Clubs and downloadable at www.novascotia.com/boating

Sail Nova Scotia is also curating a new Facebook group, Sailing and Boating in Nova Scotia, as a channel for the marine community to come together, celebrate and promote boating and sailing in Nova Scotia. (www.facebook.com/groups/sailingboatingnovascotia/)

Langley said Develop Nova Scotia will continue to look at other areas of the province that might be in the right position to participate in projects to strengthen the marine network.

“It looks as if this summer will be a local summer, but if the Atlantic bubble does open up, there’s lots of opportunity for visitors from outside Nova Scotia, from Atlantic Canada, to access more places through improved infrastructure and services. When, with fingers crossed, we open next summer to international visitors by water, we will have many more desirable destinations based on these projects,” said Langley.

There's More Than One Way to Enjoy Being on the Water

No Replies to "New Infrastructure, Resources for Boaters in Nova Scotia"