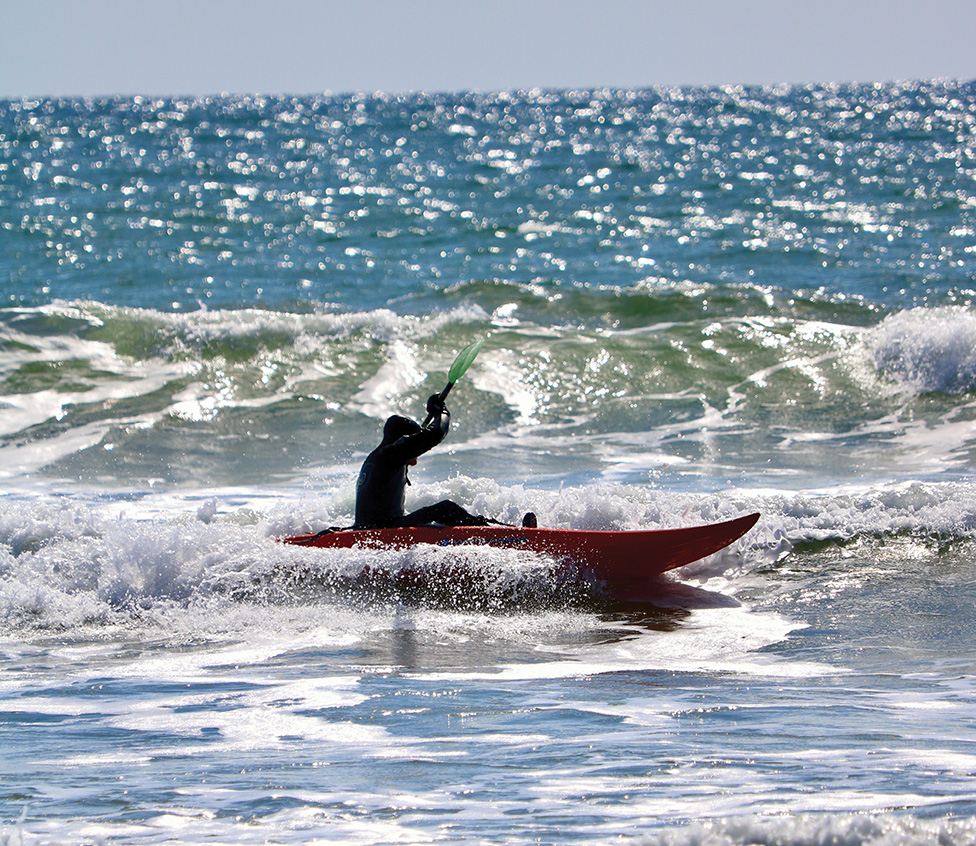 Depending on who you ask in the Therien family of Dartmouth, a good day on the water could mean windy, wavy or calm conditions.

Wife and mother Kate is a stand-up paddle boarder. Husband and father Sean likes to surf in his kayak wave rider, while son Luc, 14, is into sailing and looking forward to his first season on the i420 race team at the Royal Nova Scotia Yacht Squadron (RNSYS).

“For the three of us all to agree on a good day on the water would be a challenge I think,” said Kate in an interview. “My son likes a windy day. I like a very calm day on the water and my husband likes the waves.” One thing they do all agree on is the water, the ocean and the beach have “always been a favourite place for all of us since day one,” she said.

“My husband and I, before the water passion, we were both rock climbers. A lot of the best places for bouldering, which is rope climbing without ropes, are actually coastal areas, so we’ve always been near the water.”

Before COVID-19 struck, Sean owned and operated an indoor rock-climbing gym for 22 years. “Because of COVID-19, he had to shut it down for good in the spring of last year,” said Therien.

Last summer, Sean borrowed a kayak wave rider from a friend and was hooked.

“It’s like a surfing kayak,” explained Kate. “It’s an open kayak designed for surfing. He’s the only one who has one on the Eastern Shore where he goes. He’s usually out with all the regular traditional surfers. It’s the same waves and principles but you are sitting in your kayak instead of standing on your board.”

Sean has a good friend who surfs on his stand-up paddle board. “I can’t imagine doing that,” she said. “They are pretty adventurous, the two of them.”

For Kate, she tends to pursue her passion for stand-up paddle boarding on local lakes. Living in Dartmouth “there are lots of lakes nearby and lots to choose from,” she said. “If it is on the ocean, I go when it is calm.”

Kate took up the sport of stand-up paddle boarding in 2019, the same year Luc sailed for the first time.

“He really took to it like a duck to water. He did his Can Sail one and two and got a coach’s award. He did really well with that. Last summer he sailed two weeks in July and August and continued through the fall” aboard i420s and in the J22 race series.

Last summer, Luc also volunteered at the squadron every Wednesday night from July through to September for the big sailboat race series. “He tried to get there as much as he possibly could to get all the experience he could get,” said Therien.

With COVID-19 restrictions flattening the sails somewhat going into this season, the RNSYS i420 team has been doing a lot of Zoom meetings such as exercise workouts and weekend webinar presentations of “things they can talk about before they hit the water,” she explained. “They are trying to get as ready as they can on land virtually and physically before they get on the water.”

Kate has also been involved at the RNSYS as a race committee volunteer for the youth sailing series and regattas.

“For me being able to do volunteering with the race committee, I’m out on the water several hours on a weekend day which was amazing. Last fall, the weather was beautiful. As a parent it’s hard to see your child up close kind of thing competing or whatever so being able to volunteer, I got to be in the middle of things.”

For the Therien family, being able to get out on the water and enjoy their various recreational activities “is huge. Being out on the water can be very relaxing, it’s beautiful, it’s physical activity and very therapeutic,” she said. “My son keeps saying I should learn to sail and they do have adult learn to sail at the squadron so I might try my hand at that.” Luc Therien is looking forward to his first season on the i420 race team at the Royal Nova Scotia Yacht Squadron (RNSYS). Contributed photo