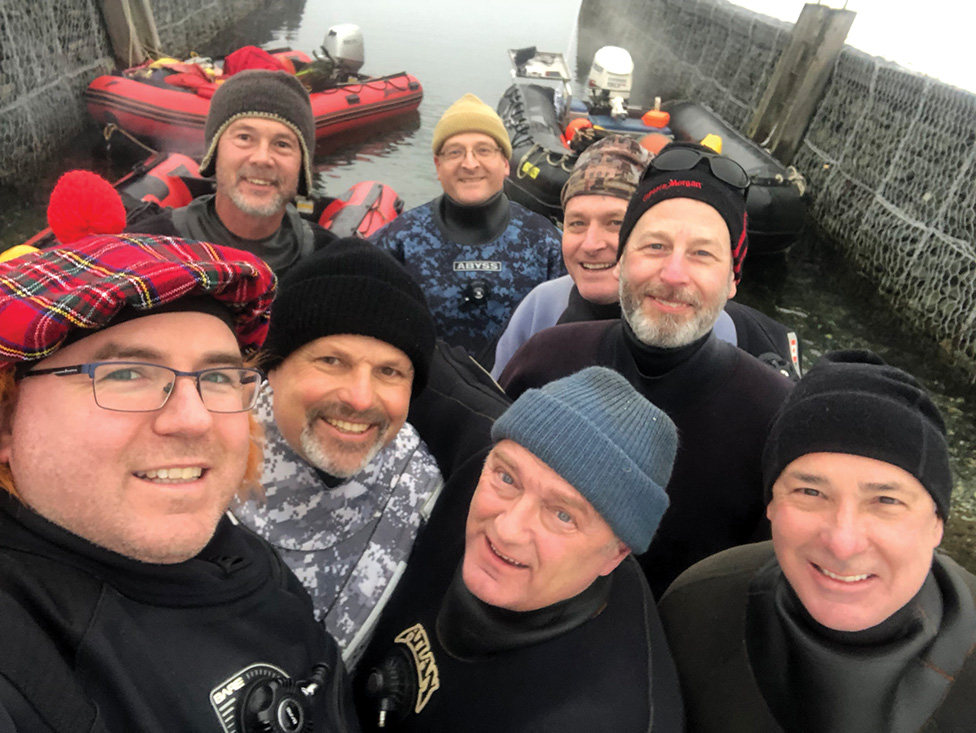 How many times have you driven over the harbour bridges in Halifax and not given a thought to what lies under those waters?

Halifax harbour has been a home, hunting ground, playground and alas, dumping ground to inhabitants of the area for many centuries. It is a natural deep water harbour that has made it strategic both for military and commerce which also makes it a very interesting dive.

During the winter months when the harbour traffic is not so busy and normal people are snuggled up in their warm beds, you can find our hardy Zodiac Pirates out battling the elements to recover what some will call trash but sometimes we call treasure.

Early on a recent cold, but clear morning, our intrepid team met at Seaview Park under the MacDonald bridge.

Our numbers were down for this dive but the enthusiasm was high. We all prepared our tanks, regs and gear, checked and double checked everything before loading it into our trusty PVC water steads (Zodiacs, or Seabright in my case).

The forecast was for four degrees Celsius, light variable winds and a high tide time of just before 0800hrs, perfect.

We headed out from our sheltered spot and into the frigid waters of Halifax harbour. Once on site, we informed the harbour master of our location and expected dive time. Jamie, Dave and Steve drew the lucky straw and were first to splash and start their decent down to the harbour floor. Once over the side, their red marker buoys and bubbles being the only reference to their position below the small chop that had now developed on the harbour surface. Dwayne and myself stayed on the topside to monitor location and pick them up once they surfaced.

As is normal, the forecast was a trick and the wind started to pick up just as Jamie surfaced about 40 minutes later.

I motored over to him and before I could get a word out, I knew he had had a good dive from the Cheshire grin beaming from his face. I helped him off with his gear and into the floor of the Seabright, all the time just itching to know what he had discovered lurking in the silt.

In good pirate form, Jamie would not divulge his secret he said until we were back at the ramp. With the weather getting worse and Jamie’s silence nagging at my mind, there was no option but to don my gear and get my butt in the water. As soon as I hit the water, I knew things had changed.

My goodie bag, which I had weighted down with a large rock and attached to my SMB (surface marker buoy), was slowly but surely bouncing along the bottom. I took my compass bearing to where I wanted to head and quickly started my decent through the cold dark water column to the ocean floor about 80 feet below.

Watching my digital readout ticking away the feet towards the silt, it was with disappointment that I hit the bottom before I saw it.

With the strong current now running and with the weather above getting worse, my visibility was almost zero. My powerful underwater light, reflecting off the particulate suspended in the water, gave me about three feet of murky visibility as I slowly pulled myself against the current. Because of this location being a narrow channel with a high current flow, most of the trash/treasure is just lying on the bottom surrounded by giant scallops and the odd nosey lobster looking for a feed.

Fighting against the current, I knew I would be going through my precious breathing gas faster than usual, then suddenly my silt covered mood lifted a little as I came across a small area at the edge of my light range where I could see pieces of broken bottles and clay pipe bowls. I slowly moved my hand back and forth like a fan over the target area letting the current carry away the disturbed silt.

As the cloud of darkness slowly cleared, almost like a scene from a Harry Potter movie, I was rewarded with my light shining on a small crockery inkwell, huzzah.

Carefully I placed the crock and pipe bowls into my goodie bag, along with a torpedo bottle with a broken top. It was now time for me to leave Neptune’s realm and return to the surface world.

Leaving my bag on the bottom, I slowly started my accent to the surface allowing my SMB line to trickle through my hand until I was finally at 15 feet where I would now swim against the current for the next three minutes as a safety stop.

On breaking the surface, I discovered a different world from what I had remembered. Quickly, Jamie helped get my gear into the inflatable and we recovered my line and goodie bag before turning back towards the boat ramp. After 20 minutes of getting pounded by mother nature, we were back on shore and able to share our finds.

Jamie’s grin was well deserved as he had been rewarded with a beautiful willow tree pattern plate from the 1800s in near perfect condition. A great day out for our little group.

Please check out the newly released book The Race to The Bottom by my good friend and fellow Pirate Bob Chaulk.

Back to the Races at Chester Race Week

No Replies to "Wrecked with Tony: Halifax Harbour Dive, Trash or Treasure?"