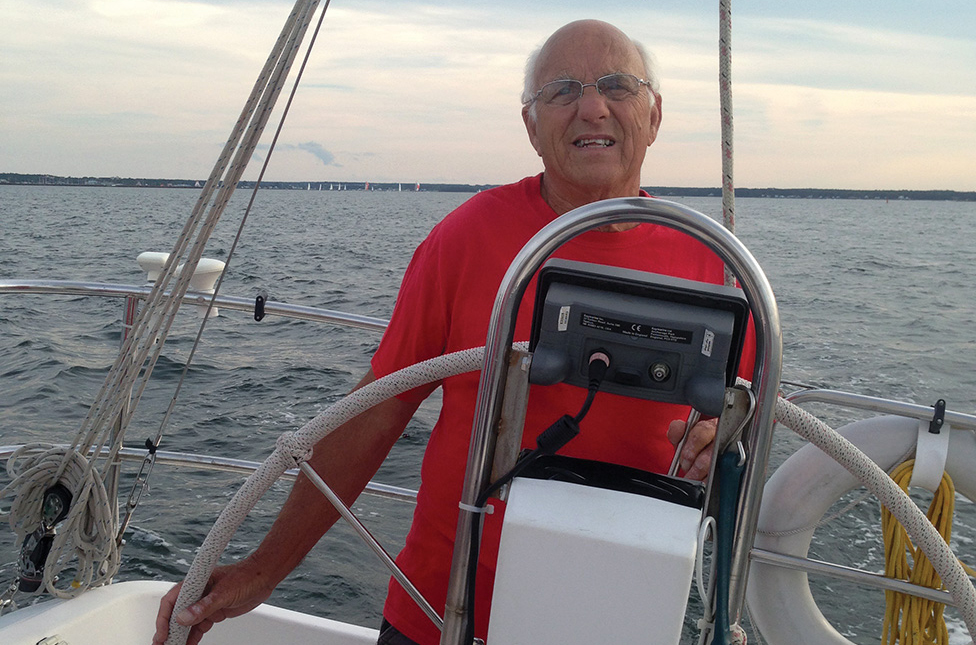 The late Mickey Cormier will long be remembered by the Maritime sailing community for his passion, knowledge and contributions to the sport.

A lifelong resident of Shediac, New Brunswick, Cormier passed away on July 8 at the age of 82.

Among other things, Cormier was a long-standing member and supporter of the Shediac AbleSail/Handi-Voile Accessible Sailing program, was instrumental in starting the Northumberland Strait Yachting Association, was a director of the New Brunswick Sailing Association and a member of the Pointe-du-Chêne Yacht Club. More than 40 sailboats from as far away as P.E.I. and at least a dozen power boats took part in a memorial sail past in honour of Mickey Cormier in Shediac Bay on Aug. 14, sailing past Cormier’s boat, the Siren 4 (right) where his family and longer-term crew members watched. Contributed photos

“He was just one of those people. He would volunteer his time without a limit at all for things he had a passion over and sailing was one of them. Skiing was another. He never wanted anything in return. He sang to his own tune,” said Greg Platt, who spent the last eight years sailing with Cormier on the Siren 4.  “The final song at his service was Frank Sinatra, I Did It My Way. That said it all to me. That brought a smile to a lot of people’s faces.”

On Aug. 14, the Shediac Bay and Pointe-du-Chêne yacht clubs and Able Sail hosted a memorial sail past in honour of Cormier in Shediac Bay. More than 40 sailboats from as far away as Prince Edward Island and at least a dozen power boats took part, sailing past Cormier’s boat, the Siren 4, anchored in the Bay where his family and longer-term crew members watched.

“It was very emotional. Not that often you see 40 sailboats all out at once all flying flags, club pennants, racing flags in honour of Mickey,” said George Richard, president of Able Sail Shediac. A barbecue followed where “a lot of colourful stories came out” about Cormier and his racing days.

“If there was a race, he was out there,” said daughter Laura Cormier, who raced with her father mostly on the red Kirby 30 named Siren 3.

The original Siren belonged to Gene Boudreau who is a Shediac legend that built a Thunderbird in the late 1960s, early 1970s and introduced a lot of people to sailing including Cormier, said Richard. “Mickey was so impressed he named all his boats Siren.”

It was on the Siren 2 where Cormier first introduced his daughters Laura and Lisa to sailing. “I was probably about four, said Laura. “Any chance to get on the sailboat with dad we always took advantage of that. I had great experiences with dad. He showed me how to sail and shared his passion with me. I still sail to this day.”

Richard said it was Cormier who initially brought him into the Able Sail program.

“He really contributed a lot to Able Sail over the years as a promoter, as an event organizer, he found us a lot of good sponsors,” said Richard.

“As a very successful program, we’ve been in operation for over 35 years and he was involved at least 22 years. We were very small when we started. The last year before COVID-19 we had eight employees in the summer and we took out over 400 clients.” Over the years, Cormier served as a director, vice-president and director of promotions for Able Sail. “He was always suggesting events to raise funds, visibility. He also organized a lot of small boat races for kids. He would find sponsors to give prizes… he was a great fundraiser. Mickey was a salesperson. He had that type of personality. He was great at finding sponsors for Able Sail and various races. He travelled extensively in the Maritimes and knew a lot of people.”

Richard said Cormier was very passionate about racing and about getting new people into the sport. One of the races Cormier was instrumental in starting a number of years ago, the annual Shediac to Cocagne race organized by the Shediac Bay Yacht Racing Association is going to be renamed the Mickey Cormier Memorial Race. The race is traditionally held the second Saturday in September.

Dan Boudreau, president of the Shediac Bay Yacht Racing Association said Cormier was instrumental in initiating and encouraging racing between New Brunswick and P.E.I. and P.E.I. to Nova Scotia through the Northumberland Strait Yachting Association, which has since been dissolved. “Those races ran for quite a number of years.”

Cormier was also an avid downhill skier who celebrated his 80th birthday by skiing Polly Mountain.

“He was serious on one hand but just so passionate about being out on the water and sailing he didn’t care if we were racing or not,” said Platt. “Even when sailboat racing, it often gets very testy at times like when you’re rounding a mark. He would always just say ‘look its not the Americas Cup. Don’t worry about it,’ so it was always a bit of the relief after all the tension of trying to do well but at the end of the day he just wanted to be on the water and enjoying the boat and enjoying sailing.”

The Siren 4 inherited by Laura will remain in Shediac Bay. “The presence of the boat makes you feel like he is still there,” she said. A barbecue get together was held following the memorial sail past in honour of the late Mickey Cormier. Hurricane Preparedness: No Such Thing as Too Much Planning

Back on the Water