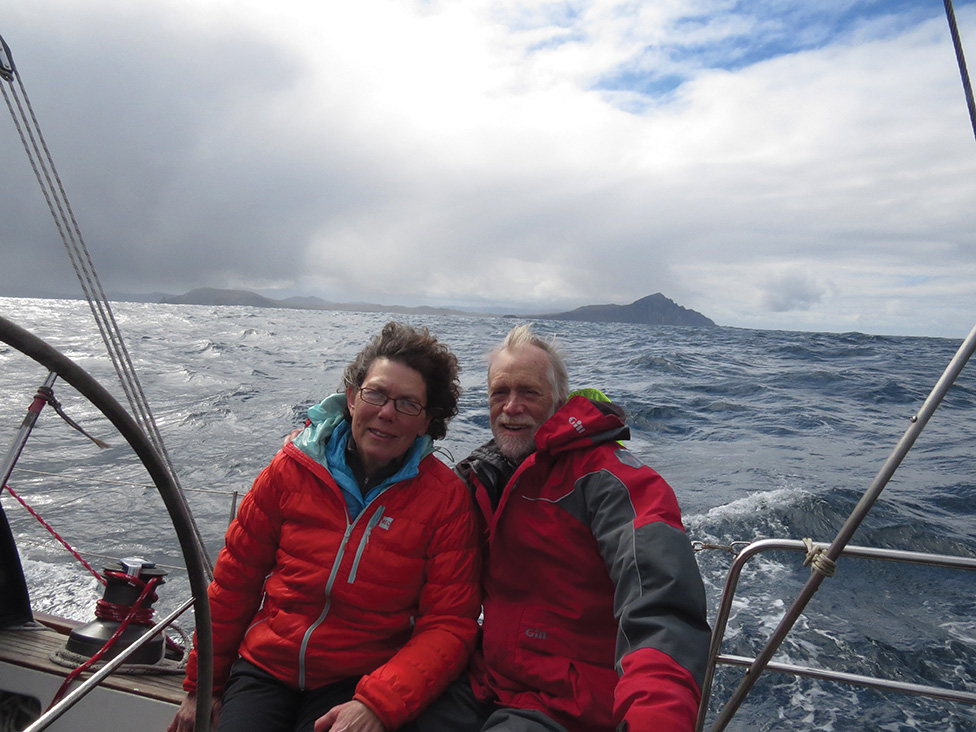 From the Antarctic to Greenland, a love of sailing has led to a lifetime of adventure for Duncan and Renée Finlayson of Hodges Cove, Newfoundland and Labrador.

It was the summer of 1963 and Duncan Finlayson had just finished his first year of university in Montreal when he first set foot on a sailboat.

“A friend and I decided we wanted to work on a sailboat for the summer and we managed to get a job on a 47-foot Alden schooner out of Long Island, New York. We had a great summer. It was a fantastic old schooner, a wooden boat with canvas sails and manila lines. A real traditional sailing schooner,” recalled Duncan in an interview.

“For a number of years, I wanted a boat. Finally in 1969, my wife Renée and I bought a small boat, a Havencraft 16 twin keel fibreglass boat. We were still living in Montreal at the time. We kept it on Lake Champlain in New York state. We had a fun summer spending weekends and our vacation sailing on this boat.” By 1976, the couple had moved to Bonne Bay on the west coast of Newfoundland. That fall, Duncan hitchhiked to Kingston, Ontario, to buy an Alberg 22, a small seaworthy fibreglass sloop, that they felt was safe for sailing in coastal waters.

The deal was made and the following summer the couple went to retrieve their vessel, the Anore, and sailed it back to Newfoundland.

“It was a huge learning curve for me,” said Renée. “The navigational gear in those days was extremely primitive. We had a transistor radio for weather forecasts, a radio direction finder and a compass.”

“It was an excellent summer,” said Duncan.

“We sailed down the St. Lawrence River along the Gaspé Peninsula and down to Charlottetown, through the Strait of Canso, then up through the Bras d’Or Lakes. We waited for a favourable weather window in Ingonish, then sailed directly from there to Bonne Bay; a 200-mile trip that took us 52 hours. It was our first overnight passage.” When the Finlaysons made the move to St. John’s several years later, another sailing adventure was in order, this time from Bonne Bay up through the Strait of Belle Isle to Conception Bay which took about three weeks, done in two legs.

“For many years, we just sailed in Conception Bay” and were members of the Terra Nova Yacht Club in Holyrood for 26 years, said the couple.

“The Rival 34 has quite the reputation for being a good sea boat,” said Duncan. “It’s not a big boat, it’s a small 34 and it’s not a very comfortable boat to live on but we trust it. It’s a good sailing boat.”

“It’s a boat we can handle as we get older,” adds Renée. “Duncan has done a lot of work on it, kept modifying it, making it easier to handle.”

The Finlaysons took the Torngat on its first long distance voyage in 1994, spending two years in the Caribbean, leaving Newfoundland in August and arriving in the British Virgin Islands just before Christmas.

“From there we worked our way southward through the eastern Caribbean, through the chain of islands down to Saint Lucia then on to Trinidad and Venezuela,” said Duncan.

“We spent the hurricane season of 1995 there. Trinidad and Venezuela are south of the hurricane belt so we felt secure. We sailed back to Newfoundland the next year.”

“It was a lifestyle rather than a vacation,” said Renée.

“Learning to live in a confined space for an extended period, not having refrigeration in a tropical environment, dealing with customs, each country having different regulations and currencies, having snail mail forwarded — these were some of the challenges. It was always exciting to visit the next beautiful island, each one unique. In hindsight, a disappointment for us was that we didn’t get to know as many local people as we would have liked to. However, making friendships with international sailors was very rewarding; we are still in contact with some of them.”

Nine years went by before the Torngat embarked on another distance adventure, a five-week voyage to Black Tickle, Labrador, followed by a trip in 2007 to the Magdalen Islands, all in preparation for a trip to Greenland with their daughter in 2008.

“I wanted to go there for 30 years,” said Duncan. “We spent most of the previous winter getting ready. We left in July from Trinity Bay and went directly to Qaqortoq, an 800-mile trip. It took us eight and half days, almost straight north out of Trinity Bay.”

Duncan said his interest in Greenland was to visit the areas settled by the Norse. The Finlaysons spent a month in Greenland.

“There was an extremely rich Inuit culture that we were immersed in,” said Renée, adding when they reached the capital Nuuk, they discovered a very modern European city.

On the way back, the couple visited their boat’s namesake, the Torngat Mountains National Park in northern Labrador.

“It was a four and half-day crossing, about 500 miles. We spent a few days there. It was getting towards the end of August and heavy weather. A lot of rain and snowing 2,000 feet up. It was time to head home.”

In total, the Torngat logged 2,800 miles on the 10-week trip. While in Greenland, the Finlaysons met and became friends with a Dutch couple sailing on a 49-foot cutter who had a goal to sail around the Americas. In 2013, they invited the Finlaysons to join them on a trip from southern Patagonia to the Antarctic.

The Finlaysons flew to Patagonia, where they joined their friends and embarked for the offshore islands off the Antarctic Peninsula, spending three weeks exploring from the South Shetland Islands, as far south as Deception Island before sailing back to Cape Horn. They anchored for two nights at Puerto Maxwell, the nearest safe haven a few miles from Cape Horn, before going on to Puerto Williams, Chile.

In all, the Finlaysons spent three months exploring the waters of southern Patagonia and the South Shetland Islands, Antarctica. Torngat tied to the old wharf at Petites, a resettled community on the southwest coast of Newfoundland, September 2019.

“The scenery was beautiful, the wildlife was fascinating. I feel very fortunate to have had the opportunity,” said Renée. “The modern navigation and communications equipment on the this trip was a far cry from the equipment we had on the St. Lawrence, when we brought our boat to Newfoundland.”

Since then, the waters of Eastern Canada have been the sailing grounds for the Finlaysons. In 2016, they sailed along the northeast coast of Newfoundland to the Strait of Belle Isle, then as far as Harrington Harbour, Quebec, exploring the lower north shore of the Gulf of St. Lawrence.

In 2018, they sailed to Cape Breton where they wintered the boat for two winters, sailing back to the southwest coast of Newfoundland in 2020.

“Duncan is passionate about boats. He spends much of his time in winter reading about boats, planning modifications and improvements on Torngat. We enjoy being on the water, living on the boat, visiting favourite harbours and discovering new ones, meeting and spending time with other sailors and local folks. It is all very rewarding,” said Renée.

“I just like sailing,” said Duncan. “If the boat didn’t have a motor, I’d be fine. I enjoy it. It doesn’t matter how fast or slow we go I just like sailing. Here in Newfoundland, there is tremendous cruising all around the island. Meeting people that are so generous and helpful is such an added bonus.”

Throughout the years, the Finlaysons have been very cautious sailors who haven’t gotten themselves into any serious situations. Waiting for the appropriate wind, patience and education are key.

The Finlaysons’ only advice to new sailors is to learn as much as you can, prepare well, talk to other sailors and get out and do it. Boating Safety is Not Rocket Science