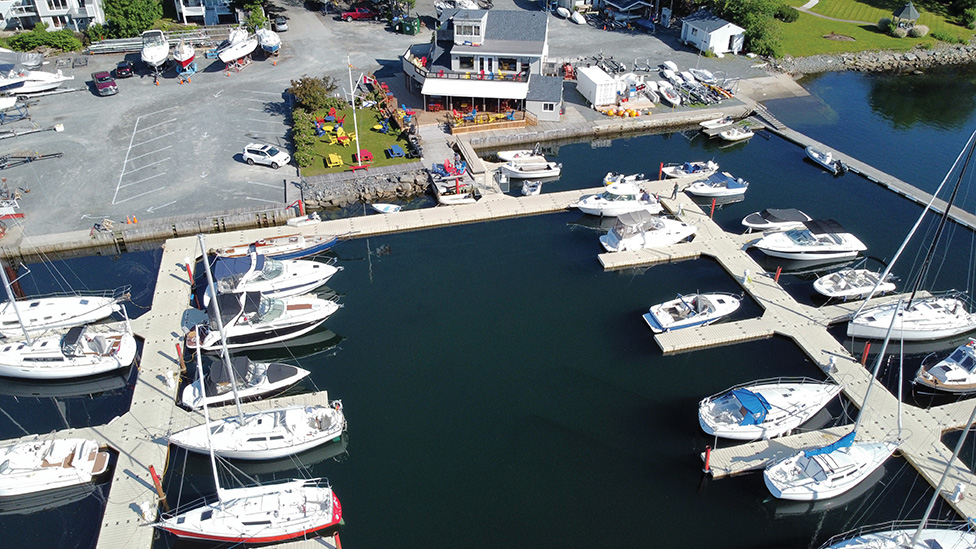 Deep in the Bedford Basin, as far as one can go, is the Bedford Basin Yacht Club, home port for more than 100 sailing and motoring vessels and a club to call their own for some 190 members.

“The Bedford Basin Yacht Club has a lot of history in the community and is your typical ‘close to home’ boat club,” says Commodore Craig Sooley.

“It’s kind of quirky looking outside and offers the same charm inside with interesting angles up in the wardroom and flags hanging everywhere. It’s a members club and we just enjoy hanging around our club whether we’re boating or on the deck in our wet weather gear watching a storm blow through and keeping a watchful eye out for our boats.”

The Bedford Basin Yacht Club (BBYC) was incorporated in 1954. In 1956, the old Bedford Tennis Club was purchased as a clubhouse.

A new awning and enclosure fabricated and installed at the Bedford Basin Yacht Club clubhouse last year extends the dining room onto the deck even when the weather is inclement. Contributed photos.

“BBYC was founded by WWI veterans, many of whom were seasoned sailors and imbued with a strong community service ethic,” says James R. (Jamie) O’Hagan, who has been a continuous member of BBYC since 1955.

“They set out to create a community-based sailing club on the broad expanse of Bedford Basin with an emphasis on racing, safety and youth self-reliance. Today, they would be pleased to see how the club and its members have carried their torch high in gaining national recognition as one of Canada’s foremost community sailing clubs.”

Over the years, there were many renovations to modernize the clubhouse building, but the construction of the current building was the result, said Sooley. BBYC facilities are often used to host community events from service club meetings to weddings.

“The club currently has a 70-berth marina and a mooring field with in excess of 50 moorings to tie up boats,” said Sooley.

“The club offers a variety of boating services, including launch and haul, storage, mast raising/lowering, bottom cleaning, fuel (both diesel and gas), tender service and dry sail through the use of the club crane.”

Sooley said the Bedford Basin Yacht Club marina was upgraded eight years ago “when we abandoned our aging wooden marina and signed an agreement with a local company to provide an EZ Dock custom marina. We have expanded the marina four times since it was installed for the 2014 season. The entire main floor of the club has been completely renovated in the past couple years and the planning committee is currently working on plans for a robust breakwater solution with upgrades to the sea walls surrounding the property. Last summer, the entire club had the exterior repainted, the main deck surface refinished and new glass railing installed and a new awning/enclosure fabricated which extends our dining room onto the deck even when the weather is inclement.”

Sooley estimated that in excess of 100 boats tie up at the club. The largest is a 44-foot vessel on a 40-foot berth. “There are members in the community which have their own docks on Shore Drive but are also members at BBYC. The club welcomes both social and boating members and has several membership categories,” he said.

The Bedford Basin Yacht Club typically has space to accommodate summer visitors, said Sooley. “In the past few years, there has been a waiting list to get on the marina but as marina occupants take their boats for summer vacations, transient boaters are able to rent space and there is typically always availability in the mooring field to tie up. We don’t get a great deal of visitors for extended periods but we have had boats book for a month or two well in advance.”

Sooley said the club has had yachts in the 50 to 60-foot range visiting and tied up to a mooring. “Visitors with boats that size typically have their own tender to get themselves ashore but BBYC will provide tender service to them upon request,” he said.

The BBYC offers the community (open to non-members) the national award-winning WetFeet Sailing Program (part of the CANSail national training series of programs) for youngsters ages five to eight, plus advanced sailing for ages nine plus, said Sooley and engages the community in water safety and safe boating courses year-round.

“The Learn to Sail program is extremely popular with typically 125 plus youth involved over the summer,” said Sooley.

“When the registration opens for youth sailing programs in February each year, it is typically sold out in the first week or two. One child can be signed up for many sessions/weeks and some are there the entire summer which makes up 300 to 400 plus sessions including Adult Learn to Sail.”

In 1970, the BBYC initiated Atlantic Regatta Canada (ARK) as an annual training regatta for competitive racing and Olympic development. “ARK is recognized as one of Canada’s longest standing training regattas with a special emphasis on youth,” said Sooley.

The BBYC opening regatta for 2022 is scheduled for June 18 and 19. In 2021, the BBYC had a total of 190 members. Approximately 110 of those are senior members and the rest are made up of social and other membership categories, said Sooley.

The view from inside the clubhouse at the Bedford Basin Yacht Club.