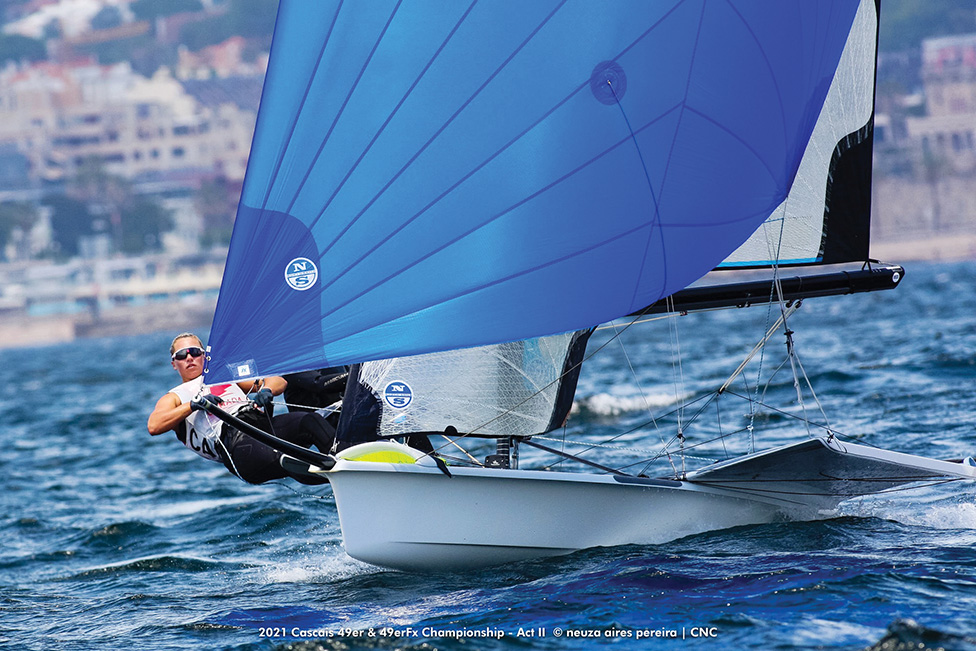 The Lewin-LaFrance team became the first Canadians ever to qualify for the medal race of the 49er FX Sailing World Championships in 2021, taking sixth spot in overall and final standings. It was the best Canadian performance ever at the competition that has been held since 2013.

The team was the bronze medalists at the European Championships in September — the first time on the podium at a major regatta and the first medal for a Canadian skiff team.

“Yes, it’s been a solid year, but we take those results like a nod of confidence towards our training. We’re headed in the right direction, and we can keep trucking along without having to re-design our whole training scheme to address a major flaw,” said the team in an interview.

“I think it’s safe to say that 2021 was an incredibly productive year for us,” said the sisters. “We spent January and February in Vilamoura, Portugal and then we took a ferry from mainland Spain to Lanzarote (one of the Canary Islands) for a large international regatta. Afterwards, we went back to Portugal for two more months of training, except this time we went to Cascais, the most Western tip in Europe. In June, we flew back to Canada with nine pieces of checked-in luggage, including two disassembled masts and two sets of sails. We quarantined for two weeks and started sailing here. We like taking the opportunity to sail different boats. Every year, we try to do a few Bluenose regattas with dad (our way of thanking him for getting us into sailing). This year, we went to Charlottetown, P.E.I., for their race week. There we sailed Etchells with two phenomenal sailors on board with us. Both the Bluenose and Etchells fleets are very strong. We learn a lot from racing against those sailors.”

“After P.E.I., we continued on to Kingston, Ontario for the FX nationals, which we’ve won twice since 2018. The 49er FX fleet is growing in Canada and we try to share knowledge with other teams so that the fleet gets stronger. That’s a win-win for everyone because they get better and we get competitive training partners.”

“There are many deserving sailors here in Nova Scotia. Reflecting back on this year puts smiles on our faces, and we look forward to learning more in 2022. We know that Hubbards will be a fantastic host for the 2022 Worlds and we’re excited to welcome the international fleet to our backyard.”

“We’ll be training in Florida for January and February and then moving to Palma de Mallorca for the Princess Sofia Regatta in March; Hyeres, France, for the Hyeres Regatta in April; Aarhus, Denmark, for the European Championships; Kiel, Germany, for the Kiel sailing week; Marstand, Sweden, for the (inaugural) Short Track World Championship; and finally, home for the World Championships.”

In a typical training camp, the Lewin-LaFrance sisters said they sail for five or six days and then take a day off.

“We repeat that two or three times and then take a bigger chunk of time to rest. A typical day looks like physio and/or gym and/or sport psychology in the morning, go to the boat and rig, sail for about three hours, debrief the sailing session, and then go home and get a good night’s sleep. That seems well-structured, but when we’re in the thick of a training camp or regatta, there’s no defined schedule. Sometimes we get off the water and find that something needs a repair, so we stay at the boat until it gets done. The next day, we show up earlier than usual to ensure the repair is solid. The 49er FX requires constant upkeep. We’ve split up the responsibilities so that we save each other time and stress. For example, Georgia replaces and splices all the line systems; Antonia takes care of the masts and sails. When we’re on the water, we do a mix of drills depending on what our focus is. The FX is a very physically demanding boat, so we do a lot of drills that challenge our fitness and boat-handling skills.”

As for the impacts of COVID-19, “The pandemic was a blessing for us. It gave us the opportunity to train at home in an uninterrupted setting. During the initial lockdown, we focused on sport psychology and fitness. When we were allowed to sail again, two male teams (49ers) and two female teams (FXs, one of which was us) gathered in St. Margaret’s Bay for a stellar training block. We stayed there and trained without having to go anywhere for a regatta,” they said.

The pandemic has made for some interesting logistical problems, however. “For example, we had shipped our one and only boat (nicknamed “Maple Syrup”) to Spain for an event. Two days before we were supposed to fly there, the world shut down. We had zero gear in North America, so we had to get creative about borrowing gear. We actually borrowed a 49er hull until we came up with $18,000 to buy a gently used one.” Sisters Antonia and Georgia Lewin-LaFrance from Chester, N.S. put in a solid year in 2021 on the 49er FX world racing stage, placing sixth overall at the 49er FX Sailing World Championships to become the first Canadians ever to qualify for the medal race. It was the best Canadian performance ever at the competition that has been held since 2013.

Once international travel and regattas were permitted again, “we jumped on it,” said the sisters. “Regattas were run a little bit differently, but at the end of the day, the racing was exactly the same. We’ve become very relaxed at the possibility of a regatta getting postponed or canceled; it’s the world we live in for the time being, and we found no benefit in stressing about things that are out of our control. We don’t know how it will impact the 2022 season, but we’ll try to take a deep breath and adapt to any roadblocks we come across.”

The Lewin-LaFrance team has been coached by the Canadian Sailing Team’s 49er coach Krzysztof Kierkowski since he was hired by Sports Centre Atlantic in 2018.

“I was happy to work with the girls this year,” said Kierkowski. “The program this year was really good, but doesn’t come cheap. Kudos to Sail Canada and the sports centre that made it happen. Hopefully we can fundraise enough money to have as good as a season next year (2022). This year is definitely going to be very challenging. We need to fundraise to buy new gear and bring together a good training program. Everything is going to plan so far. Keep our heads down and work hard and see where it gets us. If we can do that, we can achieve a lot.”

Kierkowski said the team usually tries to buy a boat hull that will last two or three seasons and goes through two or three sets of sails a year and a couple of masts. Sisters Antonia and Georgia Lewin-LaFrance, Chester, N.S. (right) were the bronze medalists at the 2021 European 49er FX Championships for their first time on the podium at a major regatta, and the first medal for a Canadian skiff team.

“If we get lucky, we get by with one set of sails,” he said.

“We buy a lot of gear. You need a lot of gear to be competitive. We had the optimum amount of gear this year and we are trying to get as much for next year. Top level sailing, you need a little bit more gear.”

“Fundraising is at the very core of our campaign,” said Lewin-LaFrance. “We receive a portion of our yearly budget from the government and our province, and the rest must be raised through private donations. This allows us to complete our yearly training and competition plan. It’s taken the support of our community to get us to where we are now and as we continue to progress, our budget also increases. Along with fundraising for training and competition expenses, we’re currently trying to secure corporate sponsorships to pitch in on our next boat, which we’ll be needing for the 2022 Worlds.”

“I’m really looking forward to it. It will definitely be more challenging than any other world championships. People think if you have a championship in your backyard its easier but in reality, it’s not. The community expectations are much higher. Managing that it will be a high priority for us in preparation for these worlds.”

Kierkowski was also a 2021 Sail Nova Scotia award recipient. He was named Coach of the Year, along with Paul Tingley a five-time Paralympian, for their work with members of the Canadian Sailing Team at the 2020 Tokyo Olympic Games.

“Krzysztof is an excellent coach who we really enjoy working with. He has helped so much with our development and all our efforts were rewarded when we won the bronze medal at the 2021 European 49er FX Championships,” said the Lewin-LaFrance sisters.

Anyone wanting to contribute to the Lewin-LaFrance campaign or looking for information can contact the sisters at lewinlafrancesailing@gmail.com or through their Wind Athletes Canada page at https://www.windathletes.ca/athletes/team-lewin-lafrance.