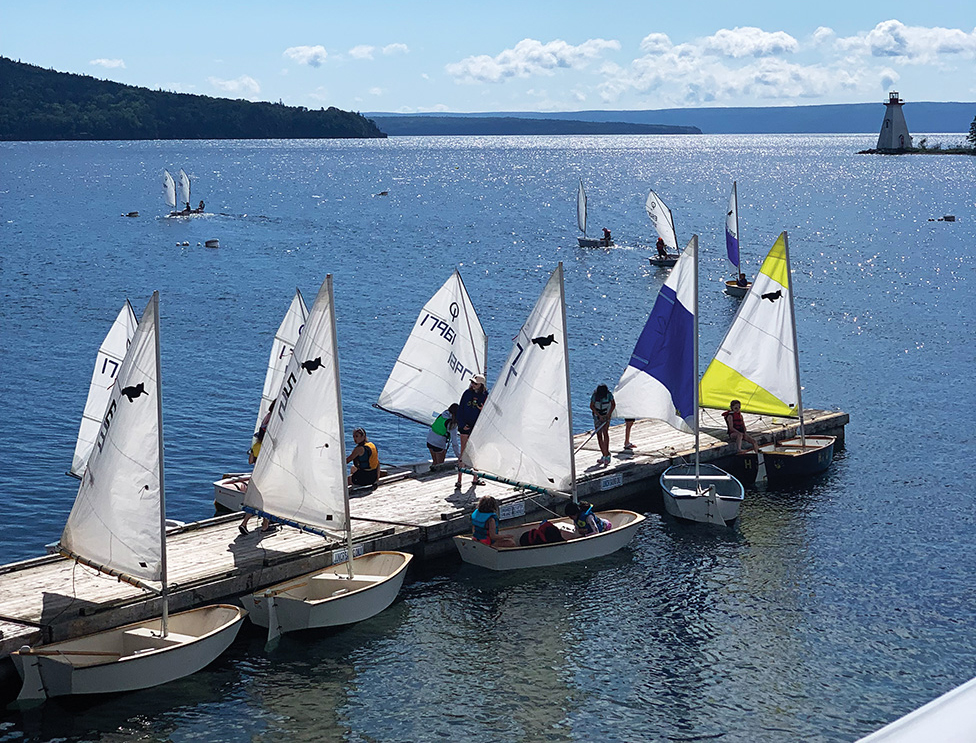 It was the Bras d’Or Yacht Club’s junior sailing program that initially brought Commodore Peter Patterson to the community of Baddeck in Cape Breton, N.S. some 25 years ago.

At the time, he had just gotten back from a stint in the Caribbean as a sailing instructor and was looking for a job.

“I called the Nova Scotia Sailing Association, that’s what it was called at the time and they said they are looking for someone to take over the program at the Bras d’Or Yacht Club. I said great, where’s that? I’ve been here ever since. I love the place. It was love at first sight,” says Patterson. Sailors ride the wind while sailing on the Bras d’Or Lakes in Cape Breton.

Now serving as the Club’s Commodore for the second time, Patterson’s enthusiasm for the community and the club hasn’t waned.

“The club has been there since 1904, so it’s really a part of the fabric of the community of Baddeck,” says Paterson. “In many ways, it’s a public portal to the waterfront, something we’re really connected with and want to focus on.”

Patterson said there is a community group, Waterfront Baddeck, who have done significant work on the former government wharf, now the community wharf.

“We actually straddle them. The club house is on one side of the community wharf, and we have a green space and a wharf on the other side so we’re working in concert with them to bring back life to the waterfront with the yacht club being a key part of it,” he says.

Then there’s long-time partner Baddeck Marine on the other side of the green space.

“We don’t have a marina. We don’t have our own docks. We have a good dinghy dock which also serves as a main berth for our support and patrol boats and then we have a junior sailing dock, but other than that we just have a key out front,” says Patterson. “We have a special relationship with the public pier and then on other side of the green space is Baddeck Marine, where there are finger piers and all the services that a cruising boater would need so we work collectively. It allows us to exist without having a marina at the club.” The Bras d’Or Yacht Club is an integral part of the community of Baddeck, Cape Breton. Contributed photos

In the summer, a lot of travelling boaters come and anchor in front of the Club, said Patterson. “Everything you need is surrounding us. In some ways the Club is like a kiosk. We can direct you to whatever you need and if you need a ride someone will probably give you one.”

Patterson said the Bras d’Or Yacht Club takes an active role in the cultural side of the community through music and by offering marine first aid courses, navigation courses with plans to do more adult education. “We encouraged one of our members who has successfully completed his basic cruising and basic keelboat instructor certification, so we expect to get that up and running, an introduction to keelboat and cruising.”

The Bras d’Or Yacht Club has an open-door policy, whether it’s providing somebody with access to the waterfront or meeting up with someone, “We’re not about to turn someone away because they’re not a member,” say Patterson. “Come and launch a bowrider or have a cold one when you get off the boat. You don’t have to be a member to enjoy what goes on here. We’re trying to build the sport and our membership, but we don’t exclude people.”

Paterson said the Bras d’Or Yacht Club has a “well-subscribed junior sailing program” which is open to members and non-members. “We’ve made a commitment to the steady development of junior sailing,” he said.

“This year our Junior Sailing Program will have 70 students with the Adult Learn to Sail filling up with 12 participants signed up at this time,” says Bras d’Or Yacht Club general manager Wanda Laffin.

“The Adult Learn to Sail is more fluid, we will get more participants once residents/visitors know their summer schedules better mid to late June.” Sailors ride the wind while sailing on the Bras d’Or Lakes in Cape Breton.

“We devoted a lot of board time to really ramping up our regatta week,” says Patterson.

“We were running very successful events and then COVID-19 came along and took it all down. Regatta week at Baddeck typically means a 25 to 30 boat event for keelboats and we’re really committed to getting back to those numbers this year.”

Laffin said the Bras d’Or Yacht Club is in talks with other Cape Breton yacht clubs to further support each other’s regattas this summer, so are expecting a good turnout.