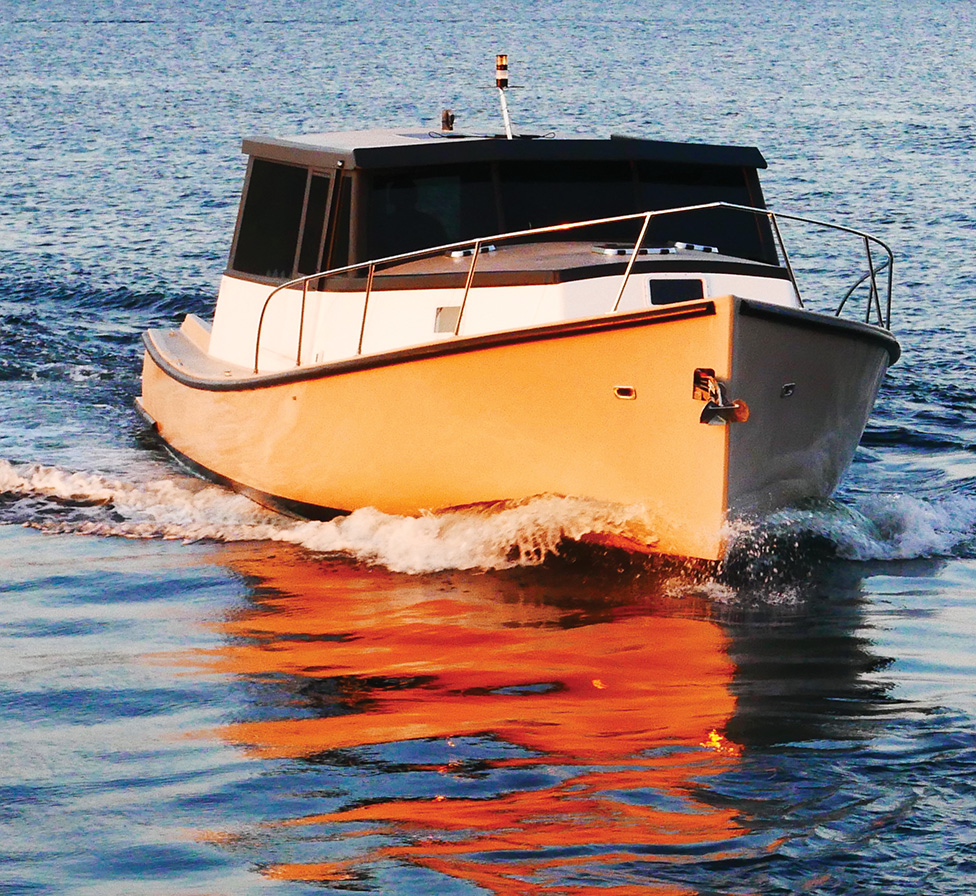 Lunenburg County boatbuilders Scott Daigley and John Steele have taken a traditional Cape Islander-style hull and used it as the platform to design and build a 38-foot pleasure craft that is not only fuel efficient but has more than a century of proven seaworthiness to its name.

The story begins several years ago, when Steele, now semi-retired, had his boat parked behind Daigley’s shop in Riverport for a refit and to lend a hand when needed.

“The crew were chatting about the state of the universe and one thing or another and it led to a discussion about a vessel Scott could put into production… what he would like to do is to have his own boat. He would have all the moulds. He wanted to get back into pleasure boat building, like he did at Covey Island Boatworks,” recalled Steele. The 38-foot Cape Sable Stanley pleasure craft launched last year by Lunenburg County boatbuilders Scott Daigley and John Steele is based on a traditional Cape Islander-style hull. At the stern of the Cape Sable Stanley is a swim platform providing easy access for swimmers or from a dinghy or dock, increased hull performance and combined with the half open transom makes stowing a tender a simple job, eliminating any need for davits or a crane. Contributed photos

“Years ago, when I first started at Covey Island, there was still quite a few wooden Cape Islanders around and some of them were just beautiful hulls and required very little power,” said Steele.

“That was the norm not the exception. A lot of them in those days were running on a GM 292 gas engine, so we got talking about trying to find one of those older boats to use as a model. The search was on. We were looking for an efficient hull form that would suit a recreational application. This all happened over a couple of years that the concept evolved.” Below the forward deck on the Cape Sable Stanley pleasure craft is a full double island berth with plenty of storage and its own ensuite shower and sink.

“He was really the first guy to popularize fibreglass. He went fibreglass full tilt, but he had to start with a shape. The scuttlebutt on the street was he tried to use what was considered at that point in time a really good model, a good hull form. He found one of the wooden hulls the guys liked, a clean, efficient hull shape and made his moulds and away he went.”

Steele said you could still see the wooden plank lines in the fibreglass hull they found because Greenwood made his moulds over wooden boats.

“Scott took that hull for a base. There were a number of subtle changes he wanted to make. He wanted to take some of the rocker out of the bottom, he wanted to add a little bit of tumble room to the aft corner and he wanted to shift the stern post. We got to the point where we had a hull everyone thought was quite good. Then it was time to come up with a design for the wheelhouse, support structure, the layout and all of that and that’s what I did,” said Steele.

The vessel has a full galley on deck with the cockpit, while below the forward deck is a full double island berth with plenty of storage and its own ensuite shower and sink. Aft to starboard is the separate head with sink that can be accessed by all the crew from above or the forward cabin.

At the bow is a deep, comfortable anchoring well that provides a secure position to handle the anchor and dock lines from and foredeck seating to enjoy the ride and view. At the stern is a swim platform providing easy access for swimmers or from a dinghy or dock, increased hull performance and combined with the half open transom makes stowing a tender a simple job, eliminating any need for davits or a crane.

The Cape Sable Stanley’s fuel consumption is what people will be most impressed with, said Steele.

Powered by a four-cylinder, Volvo 110 HP, the vessel burned just under half a gallon of fuel per hour (0.439) for a season that included a mix of offshore runs at eight to nine knots; bay and river cruising at eight knots; some fishing at zero to nine knots; a few runs at full throttle to see how fast the boat would go and how she’d handle the sea at full speed, said Steele.

“This engine was chosen specifically for its efficiency,” said Steele.

The Cape Sable Stanley is a displacement hull form as opposed to a semi-displacement or planing hull, explained Steele.

“That means it has a displacement speed and that’s as fast as it’s going to go no matter what you put in it for power. It can only go so fast. A semi-displacement will lift out of the water and a planing hull, they can take bigger engines and achieve greater speed and use a significant amount of fuel. The top speed this hull could go is 12 to 13 knots but not with this engine. You would need 150 HP. It will go 11 to 12 knots with this engine.”

Further information about Cape Sable Cruisers can be found online at https://capeislandcruisers.com/ The 38-foot Cape Sable Stanley pleasure craft has a full galley on deck with the cockpit. Contributed

Taking the Grief Out of Gassing Up