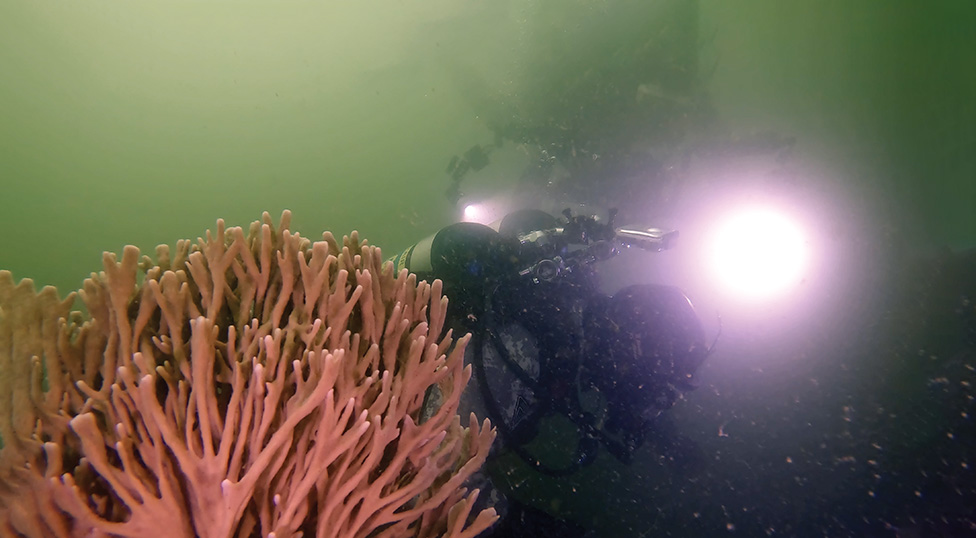 As you walk along the charming Pictou waterfront, past the replica of the immigrant ship, Hector, that brought Scottish immigrants to the Pictou area in 1773, most people have no idea what sits under the murky water just a few hundred yards offshore.

In 2015, the Canadian Hydrographic Service located a mystery wreck in Pictou harbour sitting upright in the silt bottom. Recently, while filming a local TV series, John Wesley Chisholm from Arcadia Entertainment suggested we check this wreck out and I was all in.

Local lobster fisherman Ben Anderson and diver and researcher Rob MacKay offered to take us out to the wreck site in Ben’s boat, Just Splashy, and within minutes we were bobbing on the small choppy waves above the wreck site. The image on Ben’s sonar was stunning, an unmistakable wreck standing proud of the bottom in about 45 feet of water. The excitement on deck was high as myself, John Wesley and Bob Daly suited up and prepared to enter the cloudy waters.

Rob had dropped a shot line in the water, a weighted line just off the wreck site that saves dropping an anchor on the wreck itself. We took a compass bearing on the wreck direction from the line and started our decent through the green/grey waters towards the silty murky bottom.

On arrival at the bottom, I placed my arm all the way up to my shoulder into the silt, the chances of finding anything lying away from the wreck were slim.

We headed along our compass line and only 10 feet away we came across the wooden hull of our mystery ship looming out of the bottom like a ghostly monument to this shipwreck tragedy. We had been warned that the visibility could be as little as three feet, but were pleasantly surprised to have five to eight feet on the wreck.

We slowly ascended up the stern past a massive rudder and propellors and onto the deck area. Bob’s camera lights cut through the murky soup like a laser beam illuminating something I had not expected to see , the whole deck area was carpeted with gently swaying anemones. Small fish darted in and out and around the beautiful yellow, white and red living pillars as we surveyed this once proud ship for any clue as to her identity.

I tied my reel line at the stern and started making my way forward along the edge of the hull. I was amazed that a ship of this size could have remained here a mystery for so long.

From the markings on my reel line, the ship was approximately 190 feet long and about 50 feet wide. Inspecting the debris on deck, she appeared to be a cargo ship with holds both forward and aft but because of the abundant marine life I could not find any name plates or makers marks.

The diver’s dream of finding the ship’s bell with the name clearly engraved on it did not happen for us on this dive. Fanning away the silt with my hand on a piece of the hull not entirely covered with life I could see the tell-tale crocodile skin marking of what appeared to be charred wood. Had this ghostly ship burned to the water line and then sunk at anchor, or had the anchors been set to stop her drifting on fire towards the town of Pictou? Poking my underwater light into holes in the deck area, I was hoping to get a glimpse of something lurking in the dark below that may give us more answers, but this was not to be. This old wooden girl was not talking to us today.

Slowly, I started to wind in my line as I made my way back aft through the scattered debris on deck. Out of the corner of my eye, I could see Bob’s lights at the edge of the hull backlighting a chorus line of small fish dancing through colourful anemones. Again, this was a massive bonus that I had not expected to see on this site.

Once back at the stern, we checked our gauges and slowly ascended to 15 feet where we hung in the current to complete our three-minute safety stop.

We could feel the gentle rise and fall of the water around us and realized that it had gotten a little choppier on the surface while we were below.

As our heads broke into the light, above we quickly backfinned to the boat and were helped aboard by Ben and Rob. The crew on deck couldn’t wait to hear what we thought of this magical mystery wreck and also see images from Bob’s camera.

After chatting with Rob and Ben and also checking out local stories, I think, as do many others, that this is the wreck of the Dieuze. The Dieuze was a wooden-hulled steam ship built in 1919 and sank in Pictou harbour on the 25th of September, 1925, 97 years ago. Maybe it was coal she was carrying and the dust ignited and set her on fire, but we do not know for sure.

However, one thing we do know is that we will be back to dive this amazing site again.

Many thanks to Ben Anderson and Rob MacKay and photo credit to Bob Daly and John Wesley Chisholm.

No Replies to "Wrecked With Tony: Pictou's Mystery Ghost Ship"